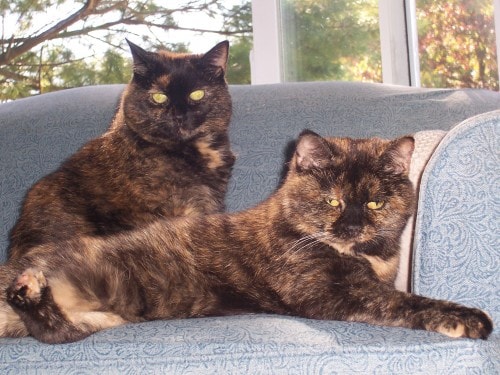 Tortoiseshell cats are named for their distinctive coloring – a combination of patches of black, brown, amber, red, cinnamon and chocolate.  The size of the patches varies from a fine speckled pattern to large areas of color.  The term “tortoiseshell” is used for cats with brindled coats that have few or no white markings.  Cats of this coloring with larger areas of white fur are called calicos. Sometimes, these colors present in lighter versions such as lilac or cream.  Torties with this lighter coloring are called dilute torties.  Occasionally, the typical tortoiseshell colors are also seen in a tabby (striped) pattern, and these cats are sometimes referred to as “torbies.”

In addition to their distinctive coloring, torties also have a reputation for unique personalities, sometimes referred to as “tortitude.”  They tend to be strong-willed, a bit hot-tempered, and they can be very possessive of their human.  Other words used to describe torties are fiercely independent, feisty and unpredictable.  They’re usually very talkative and make their presence and needs known with anything from a hiss to a meow to a strong purr.  These traits are stronger in tortoiseshell cats than in calicos – it seems as though these traits are somewhat diluted with the addition of more white to the color scheme.

As of the writing of this post, I share my life with Amber*, and those of you who’ve followed this blog for a while have gotten to know her in her Amber’s Mewsings posts.  You will soon be able to read all about Buckley in Buckley’s Story – Lessons from a Feline Master Teacher.  The photo above shows Buckley in the front, Amber behind her.

Prior to Amber and Buckley, there was another tortie in my life.  Virginia was the first office cat at the animal hospital I managed.  She was my introduction to torties, and my love affair with this particular type of cat began with her.  She, too, had the “tortitude” I so love about these particular cats.

Do you have a tortie or calico in your life?  Does she have “tortitude?”

*Sadly, Amber passed away on May 13, 2010, after a sudden, brief illness.  I now share my life with Allegra and Ruby, two tortoiseshell cats who have their own columns here on The Conscious Cat, titled Allegra’s World and Ruby’s Reflections.

14,555 Comments on “Tortitude” – The Unique Personality of Tortoiseshell Cats