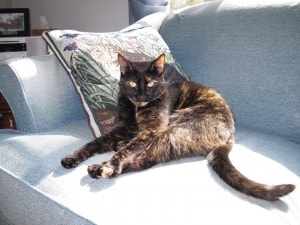 Well! Do I have a lot to talk about today! There’s been some major excitement at our house. I know Mom couldn’t wait to tell you the news and she wrote about it yesterday. Yes, we have a new family member. And let me tell you, when Ruby first arrived here on Sunday morning, I was NOT thrilled, to put it mildly. Mom made me promise not to use swear words, so I’ll try to be good, but it’s not going to be easy!

Mom had been telling me for several days that I would get a new little sister. I didn’t really understand what that meant, I thought maybe she was buying me a new special toy. Then, on Friday, Mom put a second placemat on the floor in the kitchen across from mine. Hm. That was odd. Maybe Mom wanted me to have some variety in my dining experience? I could go for that! Oddly, food never appeared there, only a second water bowl. Since humans often do very strange things for no apparent reason, I didn’t give it much thought after taking a nice long drink from it.

When Mom set the cat carrier by the front door Sunday morning, I got a little worried. Surely she wasn’t taking me to the v-e-t? I was feeling just fine, so there really was no reason for that! When she picked up the empty carrier, I was starting to get a little suspicious. She told me that she would be back soon, and that she’d have my new little sister with her. 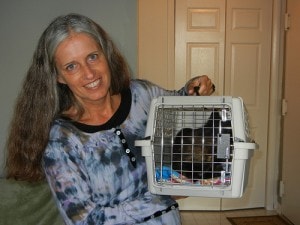 She wasn’t kidding. I heard the little pipsqueak cry the minute Mom came in the house. At first, I was curious, and I immediately went to sniff the carrier after Mom set it on the floor. I’m a smart girl, so it didn’t take me long to figure out that this was not a new toy. There was another cat in the carrier! What was Mom thinking??? I hissed and growled – at the carrier, but even more, at Mom! I was mad! Why did she have to go and bring another cat into our house? I thought we were perfectly happy together, just the two of us!

Mom said my new little sister’s name was Ruby. Whatever! She let me sniff the carrier for a good long time, then she took it upstairs. Of course I followed. I watched from a distance as Mom opened the carrier door, and Ruby bounded right out. That little thing doesn’t have any manners at all! Didn’t she know that this was my house, and that she should have asked my permission before entering? As she started to explore the house, I watched from a wary distance. If she came within a few feet of me, I hissed at her. And what did the little stinker do? She growled right back at me! The nerve!

Mom kept a close eye on both of us, and kept reassuring me that it was going to be okay, that she loved me more than anything, and that I was going to learn to love Ruby. Yeah, yeah, yeah. I sure as heck wasn’t feeling the love right then!

I have to admit, though, as the day went on, staying mad at Mome was  getting a little old, and I even got tired of hissing at Ruby. By afternoon, I was exhausted, and the sunny loveseat was calling my name. It was time for a nap! I was so tired, I didn’t even care that Ruby stretched out for a nap of her own on the floor right below me.

When dinner time rolled around, I was starving. Being on guard all day is a lot of work! I inhaled my dinner and didn’t even pay attention to Ruby on the other side of the kitchen.

I was a little worried about bedtime. I love to sleep with Mom, I cuddle up against her back or her legs, and it’s the best feeling in the world. I was really hoping that Ruby the Intruder (ha! I crack myself up!) wasn’t going to mess that up for me. And this is why I love my Mom: I heard her explain to Ruby that it was time to go to bed, and that I was used to sleeping with Mom. She said Ruby would be welcome to join us, and that she hoped that eventually both of us would sleep in the bed with her, but that it might be a little too soon for me. She made sure that I was safely in bed, and left the bedroom door cracked open. She didn’t want Ruby to feel that she couldn’t come in if she wanted to. After all, it was Ruby’s first night in a strange new house. Much as I didn’t care about Ruby, I love that Mom was so concerned about her. That’s just how my Mom is!

Thankfully, Ruby didn’t come in the bedrom during the night. I fell into an exhausted sleep, feeling comforted and safe with Mom by my side. I know Mom didn’t get much sleep, she got up several times during the night and I heard her talk to Ruby in the living room, but I wasn’t going to budge from my safe and warm spot in Mom’s bed. 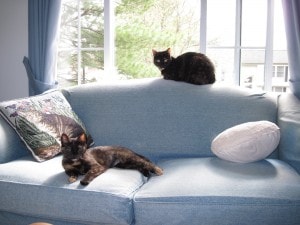 Monday morning, I woke up and thought maybe I had just dreamed the whole thing. Unfortunately, Ruby was still here. But I have to admit, she wasn’t quite as annoying as she was on Sunday. As the day went on, I hissed a little less, and mostly just watched her. By afternoon, we were hanging out on the loveseat together.

Yesterday, I relaxed even more. I still hissed and growled at her whenever she came too close for comfort, but it was getting kind of old. So a couple of times, when the little one came up real close to me, I decided not to hiss, and actually let her give me a nose tap. I also let her sit right next to me while Mom was brushing me. I love being brushed, and I wasn’t going to miss out on that just because Ruby has to have her nose in everything. Later in the day, I decided that maybe it was going to be fun to play with the little pipsqueak, and chased her without hissing at her. She chased me right back! This was actually kind of fun! We raced through the whole house a couple of times. Then I decided that I better hiss at her just a little bit, just to make sure she still remembered who was in charge. But I have to admit, it was fun!

And so it begins. I guess she’s here to stay. Mom keeps telling me that eventually I’ll love having a little sister, and that I’ll come to love Ruby. I guess I can already see that Mom might be right. As long as Ruby knows I’m in charge, it just might be okay.