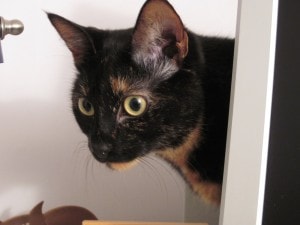 Things have been really exciting around here! Ruby and I are hard at work on Mom’s Pettie campaign. We really want her to win! Mom is the best, and she works really hard on this blog. Well, we work hard on it, too – so if she wins, we win, too!

And it’s not just the three of us who win, either: if Mom wins, she gets a ton of money. I don’t really know money, but Mom said she gets $1000 for each Pettie. That sounds like a lot of money to me! Anyway, if Mom wins, that money will go to two groups who help homeless cats find their forever homes, Casey’s House and Kitten Associates. Ruby and I both know what it’s like to be homeless. We don’t like to think about it anymore, and we know how lucky we are that Mom adopted us, so we really like it that she wants to help other cats be as lucky as we are, too.

Of course, I’m in charge of the campaign. Ruby just does what I tell her to do. We both love having such important jobs. Not that we don’t have enough to do just playing and napping and eating, but having a job makes us feel really important! So please help all of us win and vote for Mom’s blog twice a day through July 29.

When I’m not busy running Mom’s Pettie campaign, I make time to play with Ruby. She just loves to sneak up on me and then chase me through the house. Well, she thinks she’s sneaking up on me, but I always know she’s coming. I just let her think I’m surprised.

But I admit, the other day, she did startle me. I was sitting at the top of the stairs, just surveying things, when she came flying up the stairs out of nowhere. It was like a black and brown blur! I don’t know what she was after, but she sure as heck wasn’t paying attention to where she was going, because all of a sudden she realized that I was sitting right in her path! It happened so fast that I couldn’t even react and get out of the way. I thought for sure she was going to crash into me. But no, the little monkey simply leaped right over top of me! She jumped straight up in the air and landed behind me. She’s quite the jumper, I’ll give her that. Mom says she leaps like a dolphin.

I’m way too dignified for that kind of nonsense. After all, I’m almost two! I’m a big girl now.

And now I have to go. Mom says it’s time to pose for some more campaign photos. A campaign staffer’s work is never done!

Thank you for nominating us for two Petties.
We need your help to win – please vote every day!