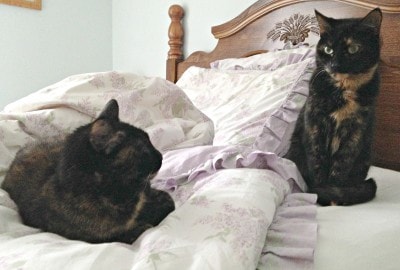 When I got sick with a nasty head cold a couple of weeks ago, I was once again reminded of the healing power of cats. Allegra and Ruby were clearly worried about me, and their quiet presence was the best medicine I could have asked for. But why don’t I let them tell you in their own words.

Allegra: I’m worried about Mom, Ruby. She’s usually up this time of morning, feeding us our breakfast.

Ruby: I’m worried about my breakfast!

Allegra: I think something is wrong with Mom.

Ruby: Does that mean we won’t get breakfast?

Allegra: Has Mom ever  not fed us, Ruby? Of course we’ll get breakfast. But I’m really concerned about Mom.

Allegra: She’s not moving much, and she sounds weird.

Ruby: I think I’m going to take my morning nap right next to her. That’s going to make her feel better, won’t it?

Allegra: That’s right, Ruby. And make sure you purr a lot. There’s research that says that our purr has healing powers.

Allegra: It’s when a bunch of humans investigate stuff that cats have known for eternity. And then they write a big paper about it and think they’re so clever.

Ruby: I just want Mom to feel better. You should come and purr for her, too.

Allegra: I’m coming. If we both purr really hard, she’ll be better in no time.

And thanks to my two purrfect nurses, I did feel better in just a few days. I also took homeopathic and herbal remedies and drank gallons of hot tea with honey, but I know that the power of the girls purrs was the best medicine of all.

Do your cats take care of you when you’re not feeling well?

22 Comments on Allegra and Ruby On Taking Care of Mom