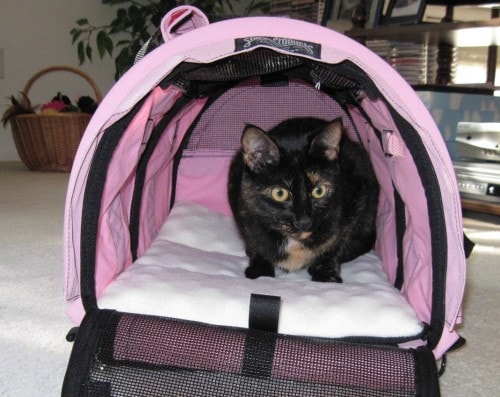 This is the third installment of our four-part series Allegra Goes to the Dentist, in which I share my recent experience with Allegra. I’m hoping that it will not only put your mind at ease if you’re faced with a cat who has to have a dental procedure, but that it will also help you ensure that your cat gets the optimal level of care before, during and after her dental work.

If you’ve missed the first part in this series, please read Allegra Goes to the Dentist – Part One: Diagnosis, and Choosing a Veterinary Dentist

If you’ve missed the second part in this series, please read Allegra Goes to the Dentist – Part Two: Preparation

Leaving for the dental clinic

The dreaded day had arrived. I will admit that no matter how much I tried to not feel anxious the day and night before, none of my tried and true techniques for reducing anxiety – meditation, deep breathing, herbal remedies, flower essences – quite did the trick. I did my best to stay as calm as I could.

After putting a very excited Ruby in her “special room” (she happily ran in as soon as I opened the door,) it was time to get Allegra into her carrier. Thankfully, my plan worked: I put a very small amount of nutritional yeast in the very back of the carrier, and she  walked right in! I quickly zipped up the front, and we were on our way.

It’s a 25 minute drive from our house to the dental clinic, and for the first half of it, Allegra cried and cried. I had never heard sounds like that come out of my little girl, and I felt awful for her. I played calming music for cats the car. These recordings, re-orchestrated especially for animals to provide comfort and reduce anxiety, feature soft piano and string versions of classical pieces. The music helped relax me a little, and eventually, Allegra calmed down, too.

Thankfully, the waiting room was quiet when we arrived. I had already asked ahead of time whether we could be put directly into an exam room so Allegra wouldn’t have to see or hear other cats and dogs. She quietly sat in her carrier on the exam table while we waited.

When Dr. Chamberlain came into the room, I sensed right away that he was going to be good with her. He has a quiet, gentle energy, and I already knew from Dr. Tasi that he’s wonderful with cats. He examined Allegra briefly, listened to her heart to make sure there was no murmur (ADOS requires all cats with heart murmurs to have a cardiac ultrasound prior to putting them under anesthesia. ADOS is part of the Life Centre, a multi-specialty practice, so the ultrasound can be performed right then and there if needed.) Everything checked out for Allegra.

At this point, I assumed that Allegra would be taken into the treatment room to collect blood, and that from that point on, she would wait in a cage until it was time to start her procedure. This had been my experience at every other clinic when I had dental work done for my cats in the past. The thought of Allegra in a cage and the stress that would put her through was very distressing to me.

Much to my relief, I couldn’t have been more wrong. Dr. Chamberlains’ head technician Jenn explained that she would take Allegra to get the blood drawn, but would then bring her back to me so Allegra could wait with me. When Jenn returned with Allegra a few minutes later, she told me that not only were they able to draw blood without any fuss, but were even able to trim Allegra’s nails (something I can only do one or two nails at a time before she fusses and bites at my hands.) I knew I’d met a true cat whisperer in Jenn.

Allegra seemed none the worse for the experience and sat quietly in her carrier while we waited for the bloodwork results.

Her bloodwork looked perfect. Once again, Jenn briefly took Allegra to the back to give her her pre-anesthetic medication, and once again, Allegra got to wait with me in the exam room while the premedication was taking effect. Allegra gradually became more and more groggy, and after about half an hour, it was time. Jenn took Allegra to get anesthesia started.

I went to the waiting room. In the past, I was always able to observe my cats during dental procedures, since they were either done at a clinic I worked at, or by a veterinarian who was a friend. While I could have asked, and probably would have been approved, to watch Allegra’s procedures, something told me that this time around, I needed to just be the worried mom in the waiting room, and I followed my instinct.

Jenn provided multiple updates throughout Allegra’s procedure: after anesthesia had been induced, after dental radiographs were taken, which showed another tooth that needed to be extracted, during the procedure to let me know that during cleaning, Dr. Chamberlain had found another resorptive lesion and that a third tooth also needed to be removed, once the procedure was finished, and a couple of times during recovery.

In all my years of being both a veterinary client and veterinary practice manager, I have rarely, if ever, seen this level of client care. I cannot say enough about how much of a difference Jenn’s calm energy, reassuring demeanor, quiet confidence  and gentle care of Allegra made in not just keeping Allegra calm, but also in reducing my stress.

About an hour after Allegra’s procedure, Jenn brought a groggy looking Allegra back to me and gave us discharge instructions.

12 Comments on Allegra Goes to the Dentist – Part Three: Our Day at Animal Dentistry and Oral Surgery