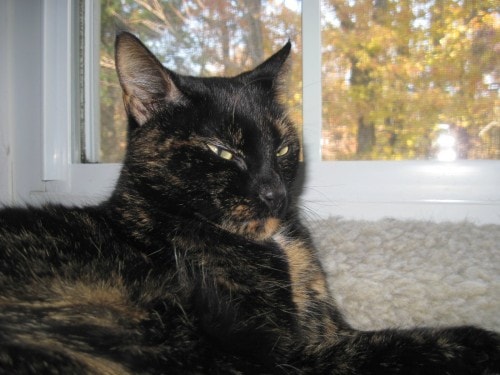 This is the last installment of our four-part series Allegra Goes to the Dentist, in which I share my recent experience with Allegra. I’m hoping that it will not only put your mind at ease if you’re faced with a cat who has to have a dental procedure, but that it will also help you ensure that your cat gets the optimal level of care before, during and after her dental work.

If you’ve missed the first part in this series, please read Allegra Goes to the Dentist – Part One: Diagnosis, and Choosing a Veterinary Dentist

If you’ve missed the second part in this series, please read Allegra Goes to the Dentist – Part Two: Preparation

If you’ve missed the third part in this series, please read Allegra Goes to the Dentist – Part Three: Our Day at Animal Dentistry and Oral Surgery

Allegra was quiet on the drive home. Once we got home, I gave her time to relax and reacquaint herself with her home. She was still a bit disoriented, but clearly very happy to be home. After she seemed settled, I rubbed her down with her own scent, then added Ruby’s scent from the socks I had previously set aside.

I had been focused on Allegra from the moment we got home, but it was now time to check on Ruby, who had started to cry in her room. When I opened the door, I immediately realized that I had made the wrong call when I confined Ruby to the guest bedroom while Allegra and I were gone. The carpet near the door showed was shredded and had clearly been clawed at. Being confined, rather than making her feel secure, as I had intended, clearly had the opposite effect. I felt awful. At that point, I also felt that I had no choice but to let Ruby out of the room.

Unfortunately, once I let Ruby out, things did not go as well as I had hoped. Ruby growled at Allegra as soon as she got close enough to smell her. Clearly, the scent exchange hadn’t completely masked the clinic smells. Additionally, the anesthesia drugs altered Allegra’s body chemistry. Cats have such a keen sense of smell, even subtle changes like that will be detectable to them. Furthermore, Allegra’s pupils were still dilated – something that cats perceive as aggression. Ruby was pretty freaked out.

Ideally, I should have separated the two for at least a few hours, possibly overnight. Unfortunately, Allegra does not do well behind closed doors, and I didn’t want to add any more stress to what had already been a very stressful day for her. Since Ruby was clearly distraught about having been confined, segregating her to a closed room was no longer a good option, either.

Since Ruby was not attacking Allegra, and Allegra seemed oblivious to anything going on around her, I decided to just let this play out.

I want to be clear here that this is not what I recommend. Generally, letting cats work these things out is not a good idea. However, ultimately, every cat and every situation is unique. I chose to go with my gut feeling, which said they would be okay.

It made for a tense afternoon, although for the most part, the girls spent time in separate parts of the house. Ruby was hyper alert, and every time she caught sight of Allegra, the growling resumed. Thankfully, by bedtime, things had settled down to the point where they both ended up sleeping on the bed with me, although on opposite corners. There was still some growling from Ruby when we got up the following morning, but by the afternoon of the second day, they were back to being friends.

How to handle problems between cats following a vet visit

For information on conventional wisdom on how to handle problems between cats after a vet visit, please read read our previous article about non-recognition in cats and how to handle it.

Allegra’s recover was remarkably smooth, considering she had three teeth extracted. She ate a small meal an hour after we got home, and another larger one a few hours after that. She was ready to play by the following morning. She readily took the pain medication that I gave her every eight hours for three days.

Most importantly, I’m sure her mouth feels so much better now.

Once her mouth has healed, I’m going to continue our regular brushing routine. Dr. Chamberlain recommended annual oral exams and professional cleanings to monitor  the progression of the resorptive disease and maintain her oral hygiene for as long as we can. The girls will continue to get exams by Dr. Tasi every six months, and we’ll keep a very close eye on Allegra’s oral health.