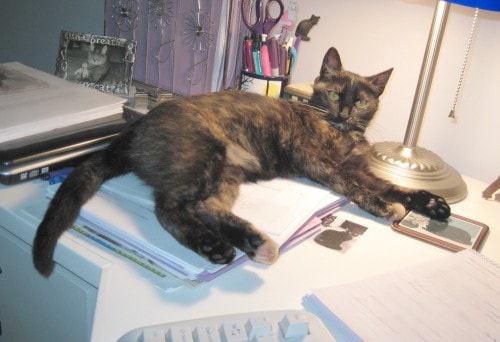 Hi everyone, it’s Ruby! It’s been forever since I last got to write something here! I want to tell you about something super cool that I did earlier this week. You probably saw Mom’s post last Sunday about how she spent a weekend at a friend’s house with no Wifi. Wifi, wifi, wifi – what a funny word! Wiiiifiiii – wee!!! Anyway, I think it means she couldn’t be on the computer. I don’t know why that’s a bad thing. I like it when Mom is not on the computer, because she pays more attention to me.

So since she went on and on about how peaceful it was to not have this Wifi, and how she needs to make more of an effort to unplug on a regular basis, I thought I’d help her along. Monday morning, I unplugged the black box that sits behind her monitor. It was great fun doing it, because I didn’t just pull the plug out – I raced around the monitor a few times first! I think the cable got caught on my paw, because all of a sudden, the lights went out on the black box.

Hmmm. I had a feeling that probably wasn’t a good thing. Mom was in the kitchen when it happened. I quietly slunk out of the office. Allegra said I’d be in big trouble when I told her what I’d done. I told her to keep her big mouth shut. That didn’t go over well. Anyway, I just figured I’d go on about my day, and Mom would never know.

However, apparently she did find out. When she got ready to sit down at the computer a little while later, I heard her say a bad word that I’m not allowed to write here. Then another one. Then she got on the phone with someone. Then she started crawling around under the desk, unplugging cables and plugging them back in. Apparently, nothing worked. Then, all of a sudden, she started to laugh. Oh good! She saw what I had done and she wasn’t mad at me!

I figured once her precious Wifi was restored, all would be forgotten, but oh no. I got a long lecture about not walking around on her desk, and about being more careful.

What’s up with that! She’s the one who said she wanted to unplug more, and I was just trying to help!

18 Comments on Ruby and the Router