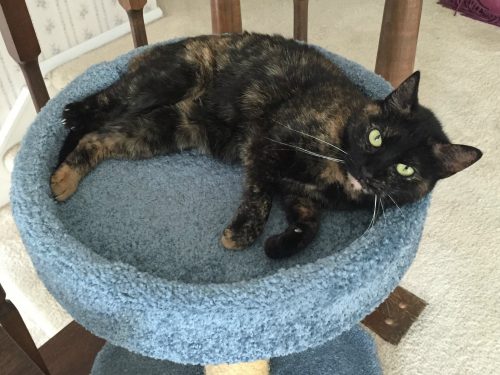 Hi everyone, it’s Ruby! If you’ve read Mom’s four-part series titled “Ruby Goes to the Dentist” last week, you already know what happened to me. In case you missed it, here are the four posts:

Ruby Goes to the Dentist – Part One: Diagnosis and Choosing a Veterinary Dentist

Ruby Goes to the Dentist – Part Three: Our Day at Animal Dentistry and Oral Surgery

Mom did a pretty good job describing everything that happened, but I figured you’d want to hear about the experience from me. After all, I’m the brave little kitten who lived through this awful trauma – and lived to tell you the story!

Something doesn’t feel quite right

So, I kind of knew that maybe something wasn’t quite right for a while. My mouth felt funny sometimes. Plus, Mom said I had stinky breath. Well, hello! Cat food smells! Then one day, my friend Dr. Tasi came over. Okay, she’s really Mom’s friend. I’m always a little skeptical when she shows up. She’s really nice and has awesome kitty energy, but she always pokes and prods me, and I’m not crazy about that. She told Mom she found something in my mouth that worried her. Well, duh! I could have told both of them. Humans can be so slow sometimes. Anyway, she told Mom that I needed to go to the dentist.

Uh oh. I remembered a while back that happened to Allegra, and it didn’t sound like it was a lot of fun.

After Dr. Tasi’s visit, I could tell that Mom’s energy was different sometimes. She felt a little anxious to me. She’s usually so calm and grounded, but on and off for the next month, I just knew something wasn’t quite right. I never thought it was because of what was going to happen to me, though!

Then, one morning, Mom forgot to feed me! How is this possible? I made my displeasure known at the top of my voice, but she just kept apologizing, saying stuff like “I’m so sorry, Ruby, I can’t feed you this morning.” What do you mean you can’t? It’s easy! You go to the fridge, take out the food, and put it in a bowl. How hard can it be? But she didn’t. I was really disappointed in her. Mom has never not fed me! After an hour of complaining, I finally resigned myself that no food was going to appear, and took a nap. Not that that was any fun on an empty stomach! Then all of a sudden, just when I was deeply into a really good dream about me taking down a really big bird, Mom woke me up. And then she picked me up and carried me downstairs. Whoa! What is happening? Next thing I know, she’s stuffed me into a carrier and zipped it up. I was trapped!

I screamed at her – this was so not cool. I could tell she was really upset, too, but she didn’t let me out. Instead, she carried me somewhere else and put the carrier on a chair or something. Then she sat down next to me. Next thing I know, there’s a loud rumbling noise, and then everything started moving! I had vague memories of having been on one of those moving chairs before. It was a happy memory. I didn’t know Mom well then, but I already trusted that the moving chair was going to take me someplace good…

But this! This was horrible! I screamed and cried. Mom spoke to me in a quiet voice, but I could tell she was upset, too. I kept crying, but eventually, that got exhausting, so I just kept my nose up against the top of the carrier. That was as close as I could get to Mom, and it was reassuring to feel her hand touch my nose through the carrier occasionally.

Eventually I calmed down a little, and just when I was getting used to this new state of affairs, the chair stopped moving. Mom said we had arrived, whatever that meant. She took the carrier with me in it and we went into a building that was way bigger than our house. A nice lady showed us into a room with a bench, and Mom sat my carrier on it. I was really scared. Mom opened the carrier. I wasn’t sure what to think, but after a minute or two, I climbed out and on her lap. That felt a little better.

After a while, a man came into the room. I ran back into my carrier! But Mom pulled me out and put me on the table in the center of the room. Even through my fear, I could tell that the man had good kitty energy. Then the man put his hands on me! I was too scared to put up a fight, but he was so gentle, it was okay

Then a woman took mom and me to another room, where she said we could wait until “it was time.” Time for what? Hopefully, time to go home! Mom held me in her arms the whole time we were waiting, but I couldn’t relax. I was trying to be brave, but there were noises outside the room, and they scared me. After waiting for a while, the nice woman came to get me again, and stuck me with a tiny little needle. After that, things are fuzzy. I started to feel really sleepy, and a bit woozy.

The next thing I remember is that I woke up and my mouth felt really different. The nice woman was right there with me, and she told me Mom was in the waiting room, and that I would be able to go home with her very soon. I was pretty out of it, so I’m not even sure what any of that meant.

Eventually, the nice woman put me in my carrier, and took me to Mom. Mom was so happy to see me, but I also sensed that she was really worried about me. I wanted to tell Mom that I was okay, but I was just too groggy and couldn’t do anything except stare at her. Sometimes, it looked like there were two of her. Weird. Finally, Mom took me to the car, and we were on our way. This time, I didn’t make a peep.

When we got home, Mom put me in our Reiki room. The room had changed from the last time I saw it: there was a litter box, a bed – very odd. I didn’t give it much thought, I was just so happy to be out of that carrier! I ran around the room, and even though I couldn’t quite keep my legs steady, it felt so much better than being in that carrier.

Then Mom left me in that room. What? Why couldn’t I go with her? A little while later, she came back with some food. Finally! I gobbled it right up, even though my mouth felt really weird, but I was so hungry! Eventually, Mom let me out of the room. I was a little disoriented, and Allegra looked at me funny.

Allegra: You smelled really strange, Ruby. I wasn’t even sure it was you!

Well, you would smell strange, too, Allegra, if you had been in that strange place all day long! I just ignored her and kept walking around the house. Occasionally, when I got too close to Allegra, her ears would go back and she’d hiss at me. The nerve!

I felt really restless for most of the night, and I could tell Mom was worried about me. The next day, I didn’t feel so hot, but make no mistake, I ate all of my meals. I didn’t want to take a chance of missing another meal! After a couple of days, I felt like myself again, and the best part: my mouth felt better than it had before I went to that strange place! It still felt a little funny, like something that was there before was now missing, but in a good way.

Mom says we don’t have to worry about my teeth anymore. That’s fine by me. Just so she never ever forgets to feed me again, and hey, don’t I deserve some tuna after all this?

20 Comments on Ruby Goes to the Dentist: In Her Own Words