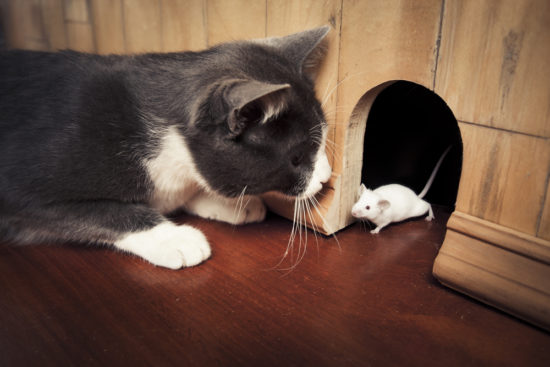 A couple of weeks ago I told you about the little mouse I trapped in our laundry room and released in my neighborhood park. (Hmm, TNR for mice? Although I skipped the “N” part…) I was well aware that mice are usually not single creatures, and sure enough, last week, I saw another one scurrying behind the washer.

As I mentioned in my previous post, the girls are not allowed in the laundry room. It’s unfinished, and there are too many nooks and crannies they could get stuck in, so it’s off limits to them. So letting them loose in there to catch the mouse wasn’t an option – and even though I’m all for letting cats be cats and exercising their natural instincts on a toy mouse, I really didn’t want that poor little mouse to get killed.

So, I set out the trap again. On the first day, the mouse outwitted me. The cheese was gone, and somehow, even though the mechanism had sprung, the mouse managed to somehow open the door to the trap and escaped. The second day, I had just settled down to watch TV. Ruby was asleep in front of the Christmas tree. Allegra was sleeping on my lap.

All of  a sudden, Allegra’s ears started to twitch. She jumped off my lap and ran down the stairs. Since Allegra hardly ever goes downstairs in the evening. I was pretty sure that she had heard something in the laundry room. Sure enough, there was an angry little mouse in the trap.

I was already in my jammies, looking forward to an evening of Hallmark Channel Christmas movies. I knew the mouse probably would have been fine in the trap overnight – but of course, there was no way I could leave him in there all night. So, I got dressed again and took the mouse for a little ride to the neighborhood park. At least it wan’t raining this time! Given that the mouse had somehow managed to dismantle the trap the first night, I was a little paranoid about just picking up the trap and putting it in my car. The thought of the little mouse getting loose in my car was just not appealing to me… So, I put the trap inside a big plastic storage container.

When I got to the park, I took the container out, then picked up the trap, opened it, and released the mouse. And it made a beeline for my car – and I had left the car door open! Thankfully, I was able to head the mouse off at the pass and managed to gently nudge him back toward the leafy, grassy area where I had initially set him free. He scurried off underneath some leaves, and I hope he is living happily ever after, maybe even reunited with his mouse buddy from two weeks ago. 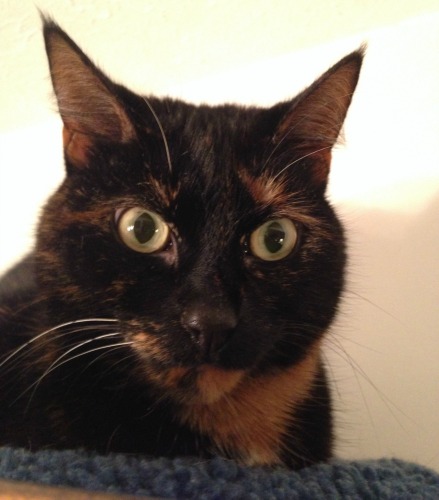 Meanwhile, Allegra was not happy with me when I returned.

Allegra: I KNEW there was a mouse in that room! Ruby and I had discussed it for a few days before Mom set the trap, and Ruby smelled it, too. Of course, Ruby slept right through the excitement when the mouse actually went inside the trap. I told Mom she didn’t have to go out again that night, I would have taken care of things for her, but nooooo. She had to be a hero and go set the mouse free. She’s such a party pooper!

Allegra: Go back to sleep, Ruby.

Ruby: Did I miss the tuna?

Since relocating Mouse Number Two, I followed the advice of one of our readers and left some tufts of fur around the outer edges of the laundry room (thanks, Debi!). So far, so good!

26 Comments on A Mouse in the House, Part Two