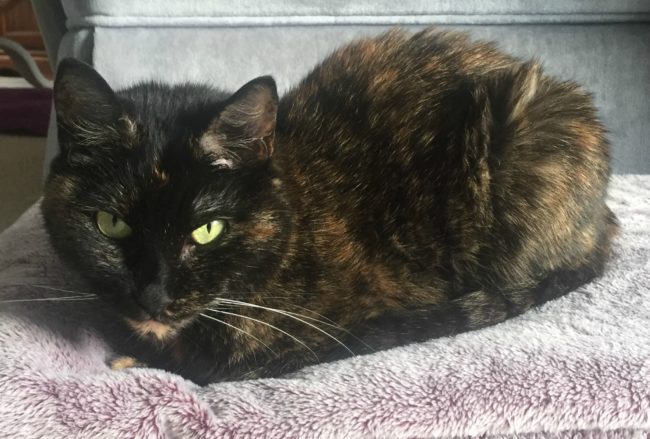 This is the third part in a four-part series about my experience during the last four months of Ruby’s life, from diagnosis to caring for her through her illness, to having to let her go. Click here to read part one, Ruby’s Last Journey: The Moment That Changed Everything and part two, Ruby’s Last Journey: Practical Considerations of Hospice Care.

Hydration is critical for all cats, but especially for cats with kidney disease. Cats with chronic kidney disease pass large amounts of urine and become easily dehydrated. Dehydration can be prevented by feeding canned or raw food, and by encouraging cats to drink.

Failing kidneys lose the ability to concentrate urine, which is why cats with kidney disease will pee more frequently and will pee larger amounts. Consequently, these cats will need more water to make up for what they lose through urination. Human patients with kidney disease often report excessive thirst, especially during the latter stages of the disease.

I never saw Ruby drink much water before she got sick. The rare time that I did see her drinking out of the water bowl, she had quite an elaborate ritual. First, she would dip one paw into the bowl and flings some water out of the bowl. Then she would repeat the same thing with her other paw. Then, she would lick her paws. It was only after she apparently satisfied herself that yes, there was indeed water in her bowl (and after she had made a big mess all around her bowl!) that she would settle down and take a nice long drink of water.

Now that she was sick, that was a terribly inefficient way to get enough water, and in the early days of her illness, her frustration showed. It was almost like she had forgotten how to drink at times. No longer content with just flinging water out of the bowl, she would drag the bowl across the kitchen floor. Sometimes there’d be so much water on the floor, I would have to mop it. I experimented with different bowls. I tried large, shallow bowls. I tried elevating her bowl. I tried small, shallow bowls. Nothing seemed to work. She tipped the elevated bowls over. She flung all the water out of the shallow bowls so that nothing was left in the bowl.

I placed additional water bowls around the house, but she only ever drank out of the bowls in the kitchen. For several mornings in a row, I found her in the kitchen sink. I tried turning the tap on for her, but she didn’t like that. I placed a bowl in the sink, and for a few days, she happily drank out of that bowl – and it certainly made things less messy! 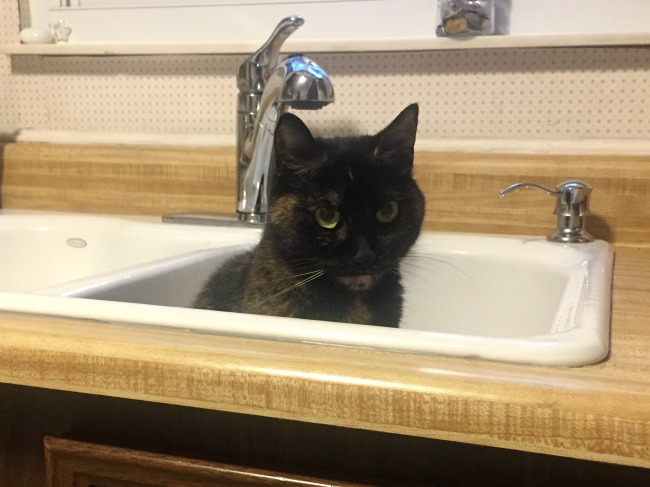 Since neither of the girls were big drinkers, I had never bothered with a fountain. I reviewed fountains over the years, but after the initial curiosity factor, the girls stopped using them, so I donated them to rescue groups. But I had to find a way to make getting water easier for Ruby, so I tried fountains again. In mid-November, we received a Catit LED Flower Fountain for review. The timing couldn’t have been better. Unfortunately, Ruby seemed to have trouble with the height of the fountain.

It wasn’t until I got the smaller Catit Mini Flower Fountain that the problem was finally solved. She loved this fountain, and while she still dipped her paw in it at first before drinking, she quickly settled for nice long drinks of water. I periodically unplugged the fountain when she was napping, and if I didn’t pay attention, I’d find her sitting by the fountain staring at it, trying to figure out why the water wasn’t moving. Needless to say, I stopped unplugging it! 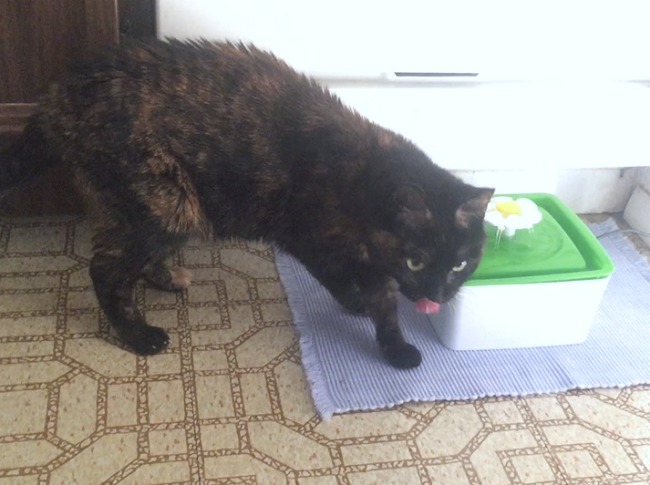 Ruby’s relentless thirst was hard for me to watch. There were times when she would wake up from a deep sleep on my lap, and race to the kitchen to get a long drink of water. She sometimes crouched near the water bowl or fountain for extended periods of time, as if it was too much effort to walk away and then have to come back to it when the thirst kicked in again. I suspect that she felt the raging thirst reported by human kidney patients.

Subcutaneous fluid administration is another way to help cats with kidney disease get enough water. It provides additional fluid intake and aids in flushing waste products through the kidneys.

Your vet will choose the type of fluid your cat will receive. The frequency of fluid administration will be determined by how advanced your cat’s renal disease is and can range from once a week to every day. Fluids are administered under the cat’s skin. The fluids will pool in a little “lump” and will be gradually absorbed by your cat’s body over the course of a few hours. Based on Ruby’s lab values and symptoms, she should have gotten fluids every day.

I wasn’t sure whether Ruby would be amenable to this procedure, and before I even started, I made a commitment to her and to myself that if she fought it, I was not going to do it. I did not want our remaining time to be marked by a daily event that she would dread.

I was always comfortable with giving fluids in my years working at veterinary hospitals. Amber needed fluids a couple of times throughout her life, and I was able to do it by myself. I had the ideal set up to give Ruby fluids in my Reiki  room: a soft massage table covered with a blanket, a floor lamp next to it to hang the IV bag from, and good lighting, so I could easily see where I was inserting the needle.

The first time I gave Ruby fluids, I had to fight my own nervousness so she wouldn’t pick up my energy. Thankfully, she tolerated it well. Other than a slight flinch when I inserted the needle, she sat still for the minute or two it took. She was a small cat, so she only needed about 75ml per session.

She did okay the second and third time. By the fourth time, she’d had enough, and cried out and scooted away from me as soon I placed her on the Reiki table. I knew if I wanted to keep going with it, I would need help. I was fortunate that my friend Renee, the owner of Whimsy Cats Specialized Cat Sitting, provides assistance with fluid therapy in the cat’s home as part of her regular services. With Renee’s help, I was able to gently hold Ruby while Renee inserted the needle.

Most of the time, things went smoothly, but there were times when Ruby cried out when the needle was inserted, or tried to get away from us. Every single one of those times, I questioned whether we should keep going. But every single time, as soon as we finished, Ruby would be all over Renee, rubbing up against her and loving on her, and then doing the same with me. Weighing the moment of inserting the needle and the minute or so of getting the fluids against the additional time regular fluid therapy bought us seemed like an acceptable trade off.

The fluids were making a difference. On “fluid days,” Ruby would spend less time at the fountain or water bowl. She seemed to have a little more energy. Ideally, she should have gotten fluids every day. However, we felt that that would be pushing our luck with daily administration. We chose to only do it every other day so Ruby would have a break in between.

For the next two months, Renee came to my house every other day. In addition to making fluid therapy possibly, her visits, like Dr. Tasi’s weekly visits, also served as another check in point for me. Was my assessment of Ruby’s health status accurate, or was I in denial? Getting Renee’s “read” on Ruby so frequently helped immeasurably.

A week or two before I had to let Ruby go, she was more and more upset about getting her fluids. We switched things up a bit. Renee held her on her lap and I inserted the needle. That worked better for a couple of times, until it didn’t. Two days before I let Ruby go, and after discussing it with Dr. Tasi, I made the decision to stop fluid therapy. At that point, it was becoming clear to me that continuing to do something that would prolong Ruby’s life when it was so obvious that she was declining rapidly was insane.

Deciding whether to do fluid therapy, and how frequently, should be decided by the cat’s veterinarian, but will also depend on each cat’s personality and tolerance level. Administration is going to be easier if you have a second person to help. Some cats are fine with frequent trips to the vet’s office to have fluids administered in the clinic. I believe that the most important factor when making this decision is to take your cat’s temperament and your relationship into account. If the therapy damages your bond, it’s not worth it.

*The Conscious Cat is a participant in the Amazon Services LLC Associates Program, an affiliate advertising program designed to provide a means for us to earn fees by linking to Amazon.com and affiliated sites. This means that if you decide to purchase through any of our links, we get a small commission. We only spread the word about products and services we’ve either used or would use ourselves.