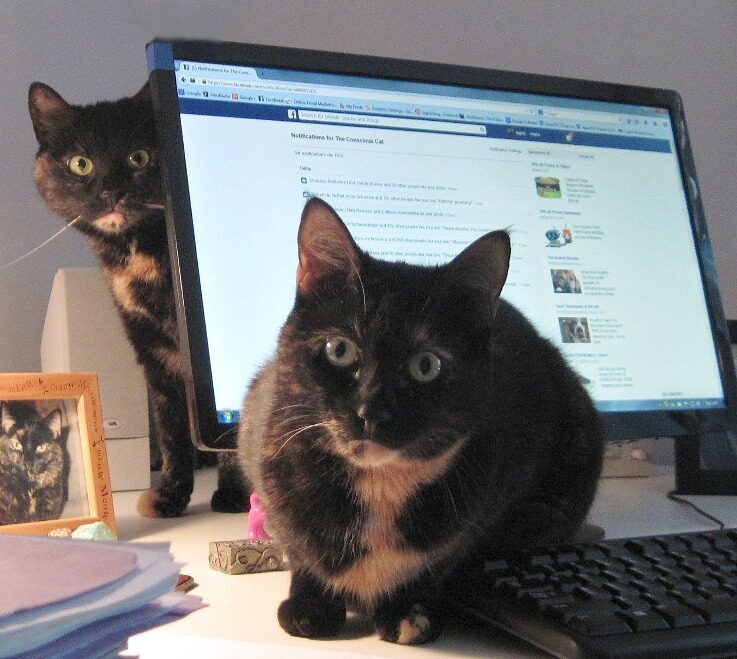 For the last three decades, I’ve been fortunate that cats have not only played a fundamental role in my home life, they’ve also been a significant part of my work life.  And I wouldn’t want it any other way.

It all started with two office cats at the veterinary hospital I managed.  First, there was Virginia, who I fell in love with at my initial interview despite the fact that her introduction to me involved claws and runs in my stockings.  She ruled the office with an iron paw, assisting me with paperwork, often by sitting right on top of it, and kept me in line with frequent swats at my mouse hand.

Several years after Virginia went to the big office in the sky, Buckley took over as office cat.  In addition to supervising my work and making even the less glamorous aspects of my job more fun through her joyful presence, she had another job at the clinic—to provide comfort to the animal patients and to distract their worried owners. There were times when she disappeared from the office, and when I went looking for her, I found her on the bench in the waiting room, next to a client waiting for news about a sick pet, cuddled up to the person, asking to be petted, and making them smile through their worry. Other times, she curled up next to a recovering cat or dog in the treatment room.

When I left my job at the animal hospital to start my Reiki practice, Buckley came home to live with me and Amber.  She quickly took on the job of Assistant Reiki Practitioner and helped me with the (human) Reiki clients I saw in my home office.  She became an active participant in the healing session. She would get up on the Reiki table and often curl up next to or on top of the client. I realized after a few sessions like this that she intuitively knew where extra energy was needed. I often skipped treating the areas Buckley laid on during a session and concentrated on others instead. I knew my little healer kitty had it covered.

Amber provided a contribution of a different kind to my home and work life.  She was a wise old soul in a feline body; she was my touchstone.  Her peaceful presence provided love, comfort and grounding for me in ways that no one or nothing else could.  When I began to think about starting a blog, she provided the creative spark, and The Conscious Cat was born. I think she’d like knowing that even though I handed The Conscious Cat over into the care of Pangolia last August, the site will now reach an even wider audience of cat lovers who want the best for their feline family members.

Allegra continued the tradition of working cats.  When I still saw human Reiki clients in my home office, she took on the position of Assistant Reiki Practitioner Trainee.  As you can see in the photo above, she took that job very seriously.  She was a little too rambunctious to be allowed in the room during treatments at that time, but she helped me get the room ready.  She enthusiastically greeted my clients and provided kitty therapy by letting them pet her and giving kitten nose taps, so that by the time they got on my table, they were already a little more relaxed than they were when they first walked in the door.  She loved being in the Reiki room after a session and really seemed to gravitate toward the energy. 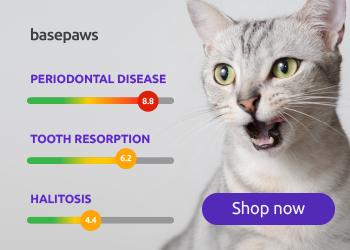 Once I switched to only doing remote Reiki sessions, she sometimes assisted by purring away in my lap while I conducted a session, but she also became interested in becoming my editor. When she wasn’t writing her own column, she could be a harsh taskmaster, correcting my writing or pointing out topics that I needed to cover.

Ruby quickly caught on that working with Mom was going to be a lot of fun, and she and Allegra actually came up with a Feline Office Assistant job description together. She also tried her paw at tech support, but that didn’t end well when she had a close encounter with the Wifi router.

Now that Allegra is my only feline co-worker, she mostly assists me by taking long naps in the bed next to my desk, making sure I take breaks to give her treats, and making sure I post plenty of photos of her beautiful self on social media.

Sharing your life with cats, doing work you love, and doing it with the cats you love – it doesn’t get any better than this.

This post was first published in 2010 and has been updated.

10 Comments on Working With Cats