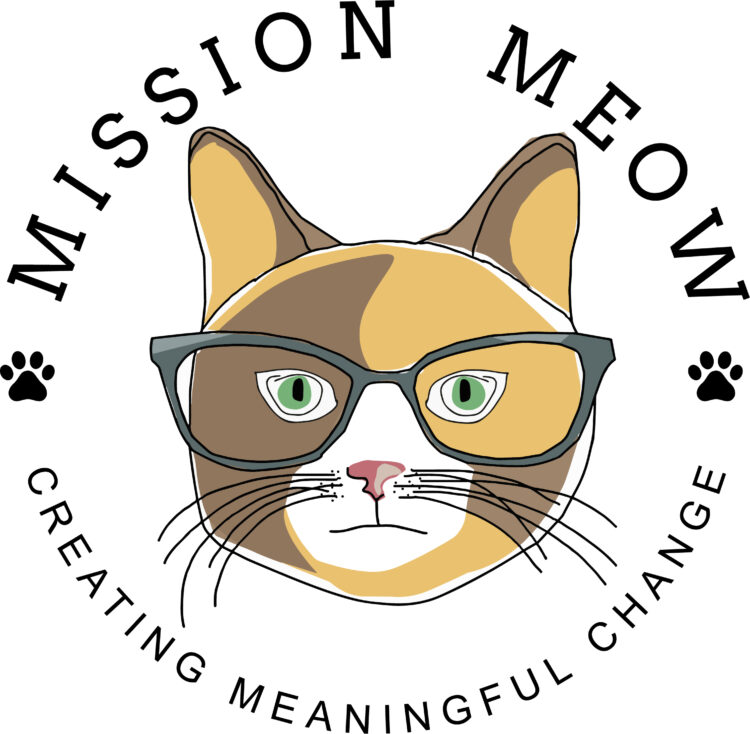 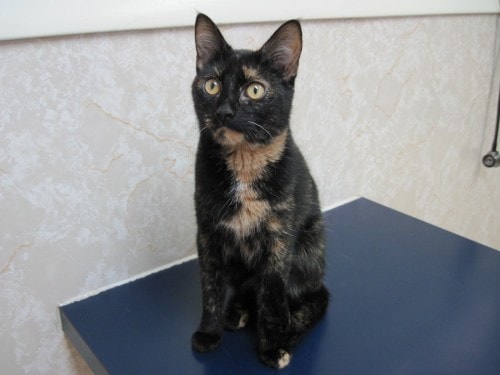 March 31 is an important day for Allegra, Ruby and me. On March 31, 2010, I met Allegra for the first time. The same day a year later, I met Ruby for the first time. I’m not even sure what to call this day. Meeting Day? First Look Day? At any rate, it was a day that changed three lives.

I found Allegra on the Facebook page of a lcoal animal hospital. I contacted the adoption coordinator, who told me that Allegra had just arrived at the clinic after living in a foster home, and that they didn’t really know much about her yet. I made arrangement to meet her. That March 31, I spent about an hour in an exam room with her. The photo above was taken that day. She was your typical ADHD kitten – discovering and exploring everything, whether it was a stethoscope hanging from a hook on the wall or a syringe cap on the floor.

She didn’t pay all that much attention to me, but I started to fall in love with her anyway.Continue Reading 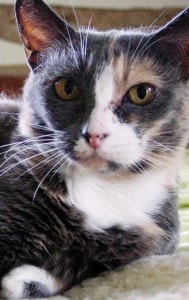 Cats come to us in many different ways. Sometimes, we go looking for them. Other times, they find us when we may not even have realized that we were lost. And sometimes, a cat comes to us through what can only be called a miracle.

Three years ago today, such a miracle took place for a stray cat and a friend of mine. I shared the story here on The Conscious Cat two years ago, and I’d like to share it again today. It’s a story of how some encounters are just meant to be. It’s a story of the perseverance of the feline spirit. And it’s a story of the miracles that can happen when we open our hearts.

But why don’t I let my friend tell the story.Continue Reading 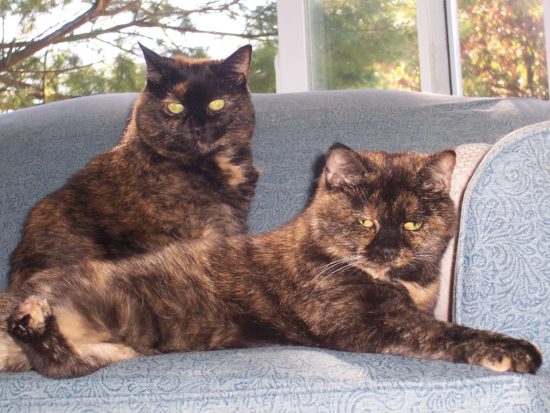 This has to be one of the more unique post titles I’ve ever come up with – but what transpired earlier this week was one of the most unique, and special, experiences of my life. Let me explain.

It all began on August 17, 2009, when I wrote a post titled Tortitude – the Unique Personality of Tortoiseshell Cats. It rapidly became one of the most popular posts on this blog. When you google “tortoiseshell cat,” “tortie cat,” “tortitude” and any number of other combination of these terms, the post pops up in the first three results on Google’s results page. Readers started leaving comments sharing stories about their torties. It rapidly became so much more than just a blog post. With more than 3500 comments to date, it has turned into a real community of tortie lovers. (Editor’s note: as of April 2012, the post had more than 9500 comments.)

About a year ago, a core group of tortie lovers began to post almost daily, and what started as an exchange of tortie stories turned into online friendships. We not only continued to share tortie stories (and anyone owned by one of these cats knows there’s always plenty of new material!), but we supported each other through life’s ups and downs. 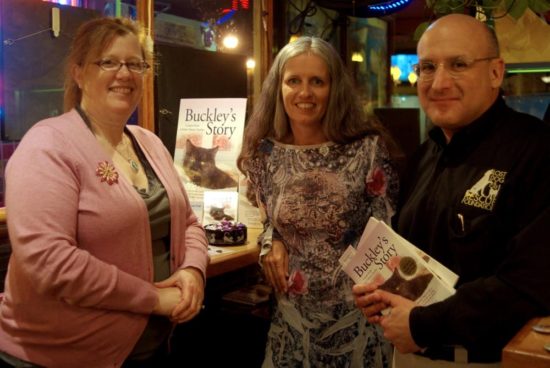 There is Harry in Virginia, who, along with his wife Julie and daughter Rachel, volunteers and saves untold feline lives with Lost Dog and Cat Rescue Foundation, and his tortie Brooke. There is Bernie in Western Pennsylvania, who had never had a cat in her life until a determined tortie named Steeler decided that she wanted to live with her. There is Jay in Eastern Pennsylvania, who taught his tortie Stirfry to trust humans again. There is Bernadette in Western Pennsylvania, whose two senior torties Kelly and Cookie grace some of her artwork. And there are many more: Glen in Canada, who rescued his tortie Kasey from a rough life outside a mechanical plant. Shannah in New York and her tortie Emma. Michael in Arizona and his tortie Honey. The list goes on and on.

With two exceptions, none of us had ever met in person. I had met Bernadette at the Cat Writers Association conference in November of 2009, and I had met Harry and his family at the National Capital Cat Show in Chantilly, VA in September of 2010. I had never met any of the others, and I never really expected to. Then Bernie, Jay and Bernadette decided that they would make the trip down from PA to come to my book signing at the Stray Cat Café, to benefit Lost Dog and Cat Rescue Foundation, on April 10. As Bernadette put it in her write-up of the event, “On Sunday I took off for Falls Church, Virginia with a person I’d never met before to get together with a bunch of other people I’d met on the internet. Sounds like the sort of thing they tell you not to do, but I happened to know that each of these persons, including myself, owned at least one tortoiseshell cat, so I knew the worst we’d do is talk about what our cats did in the litterbox or deposited on the floor.” 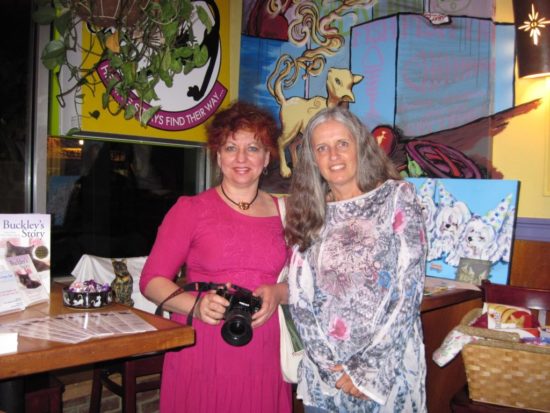 Finally, we would all meet in person, after talking to each other on the blog for over a year. When Bernie, Jay and Bernadette arrived at the Stray Cat Café, it was like being reunited with old friends. The evening flew by. Harry and his wife Julie graciously invited us to their home for brunch the following morning so we could continue our gathering before the PA contingent headed home again. We spent a delightful spring day on Harry’s screened in porch, enjoying a delicious brunch, with five of his seven cats, including the lovely Brooke who started it all, hanging out with us.

This day will forever remain in my heart as one of life’s special memories. The time went by much too fast, and we all reluctantly said our good-byes. 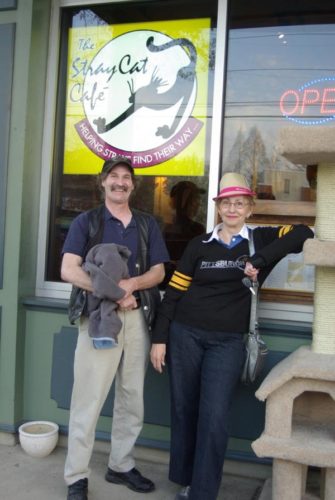 All of us continue to marvel at how all of this came about. We couldn’t come from more diverse backgrounds. Our interests vary widely. Our love for our torties brought us together.

This day will forever remain in my heart as one of life’s special memories. The time went by much too fast, and we all reluctantly said our good-byes and sent the PA contingent on their way home.

Friendships can start in the most unexpected ways if you open yourself to the possibilities. In our case, we have Brooke, Steeler, Stirfry, Kelly, Cookie, Amber, Buckley, Allegra and all the others to thank for opening our hearts, and our lives, to new friends. I, for one, will be forever grateful for these wonderful cats, and the wonderful new friends they’ve brought into my life. 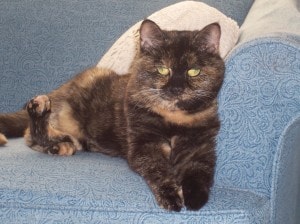 In loving memory of Buckley

Yesterday was an emotional day for me.   I went to the open house for Casey’s House, a private rescue group in Bluemont, VA.  Cindy Ingram, the founder of Casey’s House, rescued my precious little Buckley from a farm in southwestern Virginia, where she and about twenty other cats were kept in marginal living conditions.  Buckley passed away last Thanksgiving weekend.   While I had been supporting Casey’s House for many years, I had never actually seen the facility.  When I met Buckley, she was already living at the animal hospital I managed at the time.  (You will get to know Buckley and her story in my upcoming book “Buckley’s Story – Lessons from a Feline Master Teacher”).

Casey’s House is named after Cindy’s beloved tabby cat, who came to live with her when she was fifteen years old.  At first Cindy refused her entrance to her house, as she already had two cats and two dogs at the time. Casey, however, was not a cat to take no for an answer. Casey’s “home” at the time was a colony of some fifty cats, and she was probably getting tired of either not getting to her food on time, or eating off of filthy dishes.  Every evening, Casey would be waiting on Cindy’s  porch, obviously hungry, so Cindy would feed her. Slowly, but surely, Casey became a part of Cindy’s family.  Eventually, four of her feline colony friends came to join Casey.  Says Cindy:  “Casey taught me to reach beyond my self-imposed limits, and her house is the dream that now has become a reality”.

In addition to providing a safe haven for older cats, Casey’s House also promotes Trap-Neuter-Return.  Through this program, feral cats are humanely trapped, brought to a veterinarian to be evaluated, spayed or neutered, vaccinated and ear-tipped.  Cats that are friendly to humans and kittens are adopted into loving homes.  Healthy feral cats are returned to their outdoor homes.  Casey’s House spayed and neutered more than 200 cats in 2008, making a significant contribution to controlling the overpopulation problem.

I was impressed with the wonderful environment Cindy created for the cats.  There are very few cages, most of the cats live in a large open room, filled with carpeted ramps, cat climbing towers, and lots of soft pillows and blankets for them to sleep on.  New rescues and those with potential health conditions are kept in separate areas until they’ve been checked out by a veterinarian.    What was really amazing to me was how peaceful the energy in that large room felt.  All the cats seemed to get along, there was no hissing, posturing, or fighting.  Cindy said in all the years she’s done this work, she’s only had one incident with two cats fighting.  Casey’s House truly is a safe haven for cats in need.

I left missing Buckley even more than I usually do.  The visit definitely brought on a renewed wave of grief for me.  But I also left feeling good about living in a world where there are people like Cindy, who care so much and do so much for cats in need.