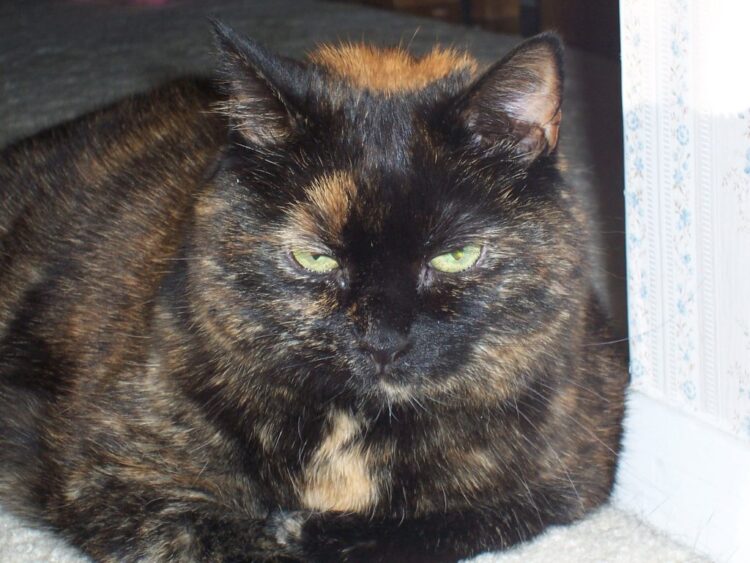 Virulent Systemic Feline Calicivirus – What Do We Really Know?

When Ingrid called me to tell me that Amber was making occasional odd gagging noises as if something was stuck in her throat, but that she seemed fine otherwise, I was certainly not expecting Amber to die within ten days.

Two days later, Ingrid told me Amber’s appetite was decreased, and she was throwing up a little bit, gagging a little more but still seemed generally fine.  My brain went on yellow alert, but not red.  After all, Amber was still eating and keeping nearly all of it down.  Her abdomen was not painful.  Most such events resolve on their own, and since Amber gets very stressed with hospital visits, the benefits of getting her checked out had to be weighed against the stress of the hospital visit.  It seemed wiser to “just watch” for a little longer.

But after a few more days of “she’s not worse but she’s not better either,” I hit my limit of “let’s keep an eye on it,” so into the hospital we went.

I didn’t think of calicivirus right away when I first examined her.  I could hear that her airway was narrowed at some point in her throat, and like Ingrid, I thought she might have a foreign body stuck there.  Cats will sometimes vomit a little if they cough hard enough, so the occasional little “urp” didn’t concern me too much at the time.  She had no fever, and her labwork and x-rays showed nothing significant.  We decided to look down her throat and hope we could pull out an offending object.

It wasn’t until I saw her larynx that I first thought, fleetingly, of calici.  The edges of her larynx were very swollen and her air passage narrowed at that point.  We passed tubes down her trachea and esophagus anyway to be sure, and found no foreign body.  The only real finding we had was laryngeal edema (swelling around the larynx), which can be caused by allergic reactions, many viruses, and a host of other things.  Laryngeal edema is quite often a transient problem in the cat, for which a cause is never identified, but in nearly all cases the cats recover as long as the edema is treated.  We treat strenuous breathing when present because it can lead to the potentially fatal development of lung edema.  So we gave her steroids and fluids, the standard approach for acute laryngitis.  Having seen such cases before, I fully expected her to be much better the next day.

When she wasn’t, I began to seriously consider other possibilities.  And here’s where the calici comes in.

Feline calicivirus (FCV) is an important and largely preventable respiratory disease in cats.  It is included in what we consider the “core” vaccination protocol for every cat.  If you’ve ever seen the inside of the mouth of a cat with regular old calici, you’ll understand why.  It’s nasty, very difficult to treat, and some cats are even euthanized because of the terrible pain it causes them.  And that’s the “good” calicivirus.

Calicivirus is an RNA virus (a virus that has ribonucleic acid as its genetic material).  RNA viruses can mutate (change) easily, which means that new strains pop up from time to time.  It likes to set up shop in cat mouths and noses, and is then passed on through pretty much any body fluid.  Calici does not die quickly when exposed to air, so it can be transmitted by such normal actions as petting one cat and then petting another.  Virus shedding is common in cats with no symptoms at all.  Cats with symptoms can have any combination of fever, conjunctivitis, ulcerations in the mouth, sneezing and snotting, and often feel totally miserable.  Some cats will develop inflammation in the joints, kidneys, or other organs.  This creates a variability of symptoms that makes diagnosis tough, and again, this is for the “good” calicivirus.

In 1998, a particularly nasty strain of calicivirus was described in California.  There have been a number of similar occurrences since, which appear to be arising independently.  What this implies about the mutating ability of the calici virus is just plain scary.  These hot strains have been designated “Virulent Systemic Feline Calici Virus” (VS-FCV), although it is misleading to give them all one name, since each is probably a new and different mutation of the virus.  They do have characteristics in common, however.  Their mortality rate is much higher than that of the usual variety, reported to be as high as 67%.  Most of the affected cats are obviously very sick.  Many develop swelling (edema) in the legs and face, because inflammation of the vessels allows circulatory fluids to escape.  Major organs can be hit hard, including the lungs, pancreas, liver, and GI tract.  Often multiple organs fail, leading to death.  Adult cats are typically hit harder than kittens.

To date, there have been fewer than 20 documented outbreaks that I am aware of.  These occurred in California, Nevada, Pennsylvania, Massachusetts, Indiana, Tennessee, North Carolina, and the United Kingdom.  They have been verified by genetic analysis, possible because these mutants are genetically different from the garden-variety calici.  In each case, the outbreak was contained and over quickly.  And to date, there have been no outbreaks reported in Virginia.  But here’s the problem: we really don’t know how many times this has happened.  We wouldn’t, because the less dramatic cases would not get the attention and research that the horrendous outbreaks have.  Most likely, a lesser problem would be treated symptomatically and never diagnosed.  Cats get sick every day with diseases that we never identify.  Most of them just get better; but some of them die.  Unless there are many victims who are simultaneously very ill, a mutant viral event probably will not be recognized for what it is.

Since a successful parasite does not kill its host, it is nearly inevitable that eventually, a less virulent form of “virulent calicivirus” will appear.  And being less fatal, it will be much harder to spot.  A quieter calici mutation might not resemble the popularly reported VS-FCV strain as much as we’d expect.  An affected cat might, for instance, have only one or two organ systems affected enough to be a problem, and may or may not have swelling of the face and limbs, and may or may not have oral ulcers.  After all, the definition of a mutation is that is different.

Could early diagnosis have made a difference?

With Amber, the unusual combination of laryngeal edema with pancreatic or GI dysfunction is what led me to ask whether calici might be the culprit.  Initially, there was no edema or fever, but we eventually saw both.  We had multiple organ failure, including cardiac; we had effusion in the chest and abdomen; evidence of pancreatic involvement; and we found no other explanation. Amber had a positive PCR (polymerase chain reaction) test for calici, but that does not necessarily mean that calici caused her disease process.  We did not do a genetic analysis.  It might have been just an ordinary calicivirus which had nothing to do with her disease.  We’ll never know for sure.

Had I considered calici sooner, could I have done more to help her?  I believe the answer is definitively yes.  There are antiviral drugs purported to help in these cases; I might have used those.  I might have hospitalized her earlier in the process, and maybe kept her from going past the point of no return with drugs to suppress immune-mediated damage.  Monitoring in the hospital would have allowed faster intervention as different systems were affected.  Her surprise development — a hidden heart condition which had never shown up on Amber’s regular bi-annual check ups, but was revealed by the combination of disease, steroids and fluid therapy — would have been detected earlier and managed better.  She might have survived, and she might not have.  But she would, perhaps, have had a better chance.

Ingrid asked me to write this article in hopes that we can help make cat owners and veterinarians alike more aware that mutant caliciviruses are capable of creating disease scenarios such as Amber’s, and that this may be more common than we realize.  Mutant caliciviruses don’t have to be the total train-wrecks reported in the news.  Having the possibility of calici in our heads earlier in the process may save some lives.

This is not an alarm call, and it is not intended to inspire fear.  You should not lock yourself in your house, nor avoid the vet, or anywhere else where another cat might be found.  You should not give up adopting kittens.  Diseases will continue to appear, as they have throughout history, and though most never affect most cats, some cats will get sick, and in rare cases, the outcome will be devastating.

But if you see symptoms similar to Amber’s, perhaps this story will encourage you to wonder whether it could possibly be a case of a more-than-commonly virulent strain of calicivirus.  If the answer is yes and you intervene early, your cat may have a better chance than Amber did.

PS:
I should mention that there is a vaccine available labeled for protection against the virulent calicivirus.  This vaccine was developed from one of the mutant strains; however, since each mutation arises independently, there is no way to know if it would be protective against any new mutation.  It is a killed vaccine, requiring the use of an adjuvant, which we think may play a role in the rise of injection site tumors; and it is a new product, so time has not yet shown if there may be other risks with it.  We don’t even really know how prevalent virulent strains are at this time.  So – would I vaccinate my cat against VS-FCV?  Absolutely not. In my mind, the risk of vaccinating with a product as new as this, with such questionable efficacy, far outweighs any benefit likely to accrue.