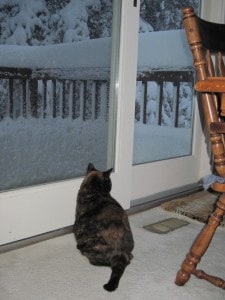 It’s been an interesting couple of weeks here!  We got a lot of snow, and I mean a lot!  The photo above shows you what we woke up to Saturday morning – and that was less than half of what we got altogether that day.  Mom was really stressed about things on Saturday.  She woke up at 3am and realized that our power had gone out.  I don’t know what she was so worried about, we were snuggled in bed together and it was nice and toasty, but I could feel her energy going all weird on me and I knew she was scared.    After a while, I realized what she was worried about – it got a little colder than I like to it be in our house.  I guess this power she was so worried about is what makes our house warm.  I wasn’t worried, though – I knew Mom wouldn’t let me get cold.  She put out lots of blankets for me to snuggle in.  I just wished she’d stayed inside to snuggle with me, but instead, she kept going outside to do what she called shoveling.  It looked to me like she was just moving the white stuff around, and I don’t understand why she didn’t just leave it in place, but that’s humans for you.  Whenever Mom came back inside, we snuggled under the blankets together, so I thought it was a pretty decent way to spend a Saturday.

Thankfully, this mysterious power came back on Saturday afternoon and 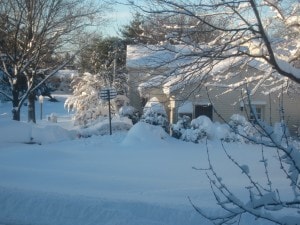 Mom started to relax, not to mention warm up!   Sunday was a gorgeous day, the picture on the left shows you the view out of our living room window on Sunday morning.  Mom says it’s called winter wonderland.  All I can say is it was blinding to look outside and see all this white stuff, with the sun reflecting off of it.  But I was happy to have my sunny spots back and spent the day soaking up warmth and snuggling with Mom.

On Tuesday, Mom started getting worried again – apparently, they were calling for more of that white stuff.  I think Mom was scared that we’d lose the power again.  I hate when Mom worries, and I knew I needed to find a way to help her.  I was getting a little frustrated with Mom, it was like she was forgetting all the lessons my sister Buckley had taught her about not getting caught up in fear and worry.  So I made sure to remind Mom that Buckley wouldn’t like it that she’s already forgotten the lessons, and I think it really  helped Mom.  She even blogged about it (Letting Go of Fear and Worry During the Storm).

So when round two of this snow stuff started, Mom was calm, which made 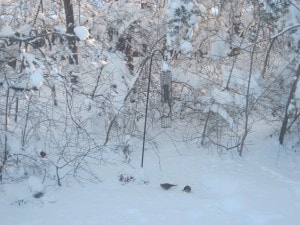 things much more pleasant.  It helped that the power stayed on.  I got a little scared when the wind kicked up big time (Mom said it’s called a blizzard when it does that), but Mom reassured me that everything was going to be fine.  I like how we help each other.  The storm made for some great bird watching.  I have to respect these little birdies, they’re made of tougher stuff than I am.  I’d hate to have to be out in this kind of weather.  I’m so grateful I’m an indoor kitty.

Things are back to normal as far as I’m concerned.  And anything that keeps Mom home with me even more than usual is fine by me.  I do wish they made kitty sunglasses though – it’s just so bright out there!  I think I’ll just take a nap in the sun.

9 Comments on Amber’s Mewsings: After the Snowstorm