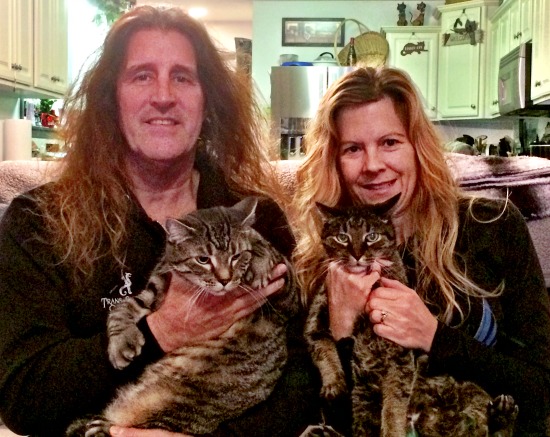 Jeff Plate is one of the most accomplished and hardest working drummers in rock and roll. The New York State native began taking drum lessons at the age of 12, after a sports injury ended his dream of becoming a pitcher for the New York Yankees. Best known for his work with Trans-Siberian Orchestra (Jeff has performed on every TSO release since the band’s inception in 1996 and has been part of every TSO winter and spring tour,) he has been the drummer for Heavy Metal icons Metal Church since 2006, and has also worked with Savatage, TSO guitarist Chris Caffery, and former TSO violinist Mark Wood’s Electrify Your Strings program. Jeff shares his rural New York state home with wife Cathy, two cats and a dog.

I had a chance to catch up with Jeff and Cathy after Jeff just finished the hugely successful 2016 TSO tour.

Tell us about your pets. 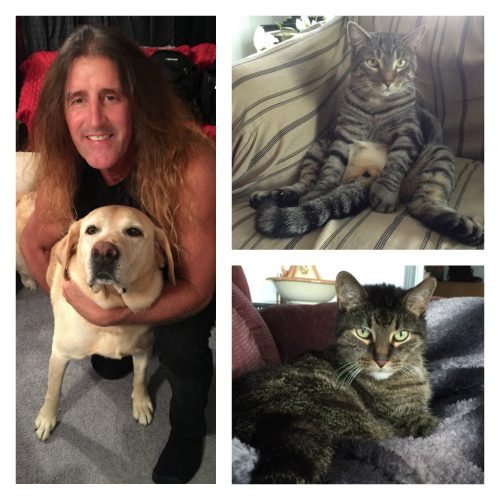 Snickers is a 20 something-year-old Tiger, and Bodi is a 5-year-old Polydactyl grey and black Mackerel Tabby. He has seven toes on each of his front paws and six on the back. At 17.5 pounds he’s a big boy, the coolest cat I’ve ever known. Lucy is a yellow Labrador Retriever. She will be 9 years old next month. She was originally owned by our nephews, but due to their schedules and lack of time to spend with her, she first went to my father’s, then decided she was going to stay with us and has been here for 3 years. We literally live next to each other so it wasn’t a huge change for anyone. She is very smart, very friendly and very protective. A great dog.

Cathy, how many cats did you have when you and Jeff started dating, and were you worried that your cats might not accept him? How did the first meeting go? 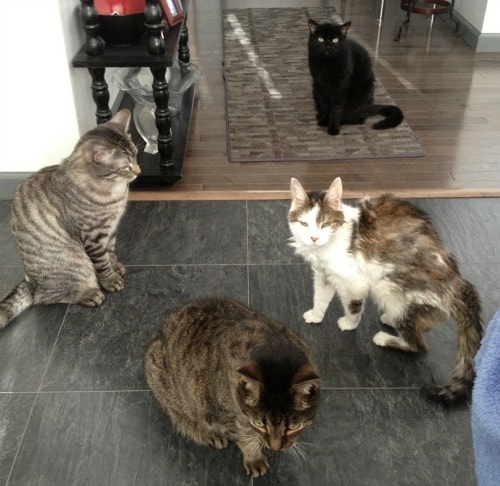 I had three cats at the time: Angel, a white (a couple of spots) short hair; Coco, a black haired medium hair, and Snickers. Jeff rarely saw Snickers or Coco as they were always in hiding when I still lived in Ohio. As soon as we moved, it all changed, and they really became different cats. We wonder if it was just being in a new home and they just made it theirs – we’re not sure, but they all got along and never hid from Jeff again!

Jeff, you weren’t really a cat person until you met Cathy. Tell us what it was like to get to know her cats.

I’ve honestly always been good with cats. I didn’t have a pet for years because of my travel schedule. Angel was a little cranky and territorial, but we got along fine. As Cathy said, Snickers and Coco were always hiding and I probably saw them a total of 30 minutes a piece over the course of 2 years.

Jeff, Cathy moved to your home in New York state from Ohio with her cats when you got married. How did the cats handle the change, and what was the most surprising thing for you about living with cats?

Jeff: Surprisingly it was an easy transition. We had all of the cats in carriers for the trip. When we arrived at our new home, I took Snickers out of the carrier and held tight to him and walked him around the house, through every room upstairs and downstairs. I think it was the first time I even touched him, let alone held him. After that he was my best buddy and followed me around everywhere.

Coco took off and hid under the bed. Angel calmly walked around and checked things out.

They seemed to really like their new home. They were friendlier and more social right from the start. Once they figured where to hide when I was drumming, we fell into a routine.

Cathy: As Jeff said, things were really easy. I think we were both really surprised and thrilled at just how much friendlier Snickers and Coco were! 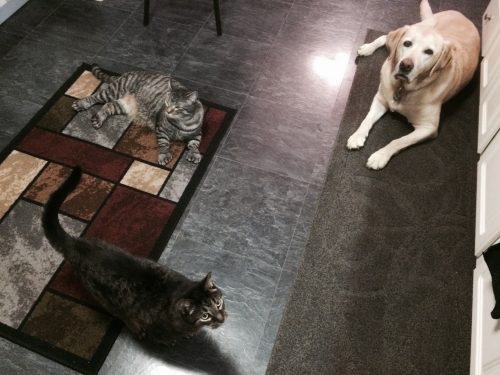 Do all the animals get along?

Yes, they all really do. Snickers is getting old, and it’s funny, there are times he’ll just jump on Bodi like he’s still a kitten and ready to play!

Jeff, you spend a good part of the year touring with TSO and Metal Church. It must be hard being away from your pets. How do you cope?

Of course I miss them. For all intents and purposes they are my kids. They are part of my daily life when I’m home, but I know they are in good hands. They all get a little depressed when they see the suitcase come out, and Cathy says they are all in a funk for awhile. I think Lucy understands me not being there and the length of time that I’m gone, but I’m not sure if the cats understand that. They are always happy to see me again, but for all I know they may just think I went to the store.

I would imagine that your cats are used to hearing music all the time, but not all cats like loud noises. How do your cats react to your drumming?

At first they ran for cover like they were under attack. Now they go to their favorite spot and sleep.

Do they have a favorite genre or band?

Mainly bands with animal names. Three Dog Night, Steel Panther, White Lion, Whitesnake, Def Leppard, The Eagles… they have a wide range of tastes. Speaking of tastes, The Trans-Siberian Orchestra is truly their favorite. They are well aware of what brings them their favorite foods and treats.

Oddly enough, their favorite sports teams also all have animal names. Go figure… The only teams we all root for together are the Buffalo Sabres and the Buffalo Bills. Otherwise we are usually rooting against each other.

Jeff: We’re very lucky in that these cats both have great personalities. Bodi, at 17 pounds, still acts like a kitten half of the time, so he’s a lot of fun. He’s the only cat I’ve ever known who plays fetch. And even though Snickers is 20+ years old, he’s still playful and very well behaved. The hardest things are cleaning litter and sweeping up hair, but that’s nothing.

Cathy: Yes, we’ve been very lucky with all our cats. I love how they love us…. They know they are taken care of and show it. It’s not really hard, but the hair of three animals and basically an all black wardrobe…… you get it.

Is there anything else you’d like to add, Jeff?

If I could, I’d probably have a house full of cats….. they just make me happy and really are easy, very lovable pets!

You can learn more about Jeff on his Facebook page.

8 Comments on Cats and Drums: How Cats Became an Important Part of Jeff Plate’s Life