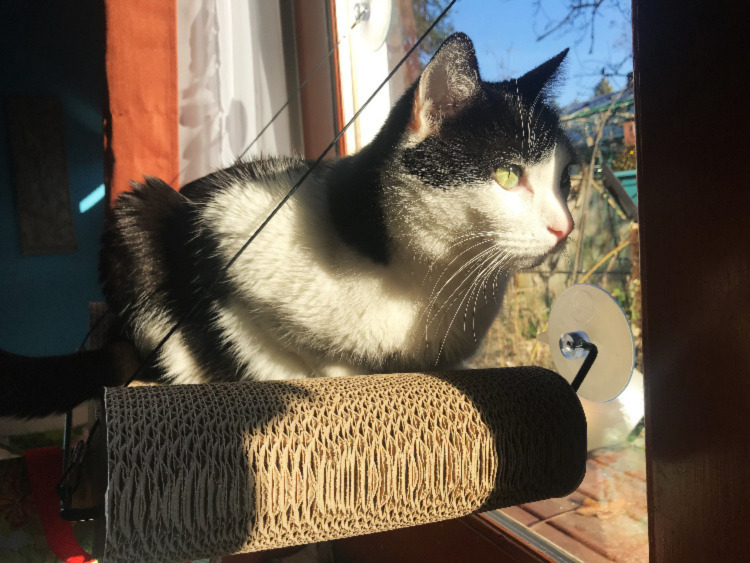 This is a sponsored post, written by: Rowyn Rose, Science Communications Specialist at Basepaws*

Jupiter came into my life rather unexpectedly. Let me explain.

In February 2016, I drove just shy of three hours to a shelter in Oregon to adopt two older kitties with beautiful black coats. They were surrendered after their elderly owner could no longer care for them, and they had fantastic names that I had no intention of changing. Azrael was a sleek panther of a cat aged 14 years—inseparable from sweet and portly Loki, who had been his loyal companion for nearly eight years.

After initial greetings and conversations with the staff, I was led to a back room where I was told that Loki and Azrael resided so that they could be together. I entered quietly, noticing a lounging Loki up high on a soft bed. Azrael restlessly paced across the floor beneath him. After a gentle introduction with Loki, I got down on my knees to allow Azrael to greet me if and when he was ready. He made his way to me, rubbed his face on my hand and on my knees, and purred like a motorboat before he resumed his laps around the room.

I continued to silently observe them. A blink of the eyes later, I felt a soft scratching on the top of my legs. When I looked down, two large green eyes of a tiny, beautiful creature beamed at me. Following with a high-pitched “meow”, the feisty tuxedo kitten bounded toward a kennel that was partially hidden by a curtain. I was told that his name was Benjamin.

In that moment, there was no question that I was going home with three cats that day—the very same day that I changed the kitten’s name to Jupiter—and we all began a fantastic journey together. 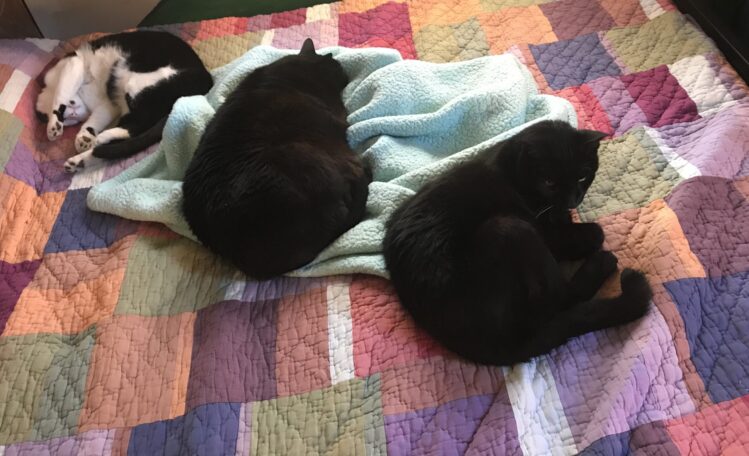 A Challenging Couple of Years

In 2021, we lost Azrael. He was one of the most robust and healthy cats I’ve ever had the privilege of parenting, and he lived for nearly 19 years. As it is in so many cases, he was fine until he wasn’t. The appreciation I have for the time that Azrael graced my life cannot be captured by words. The image of him below is from his last Christmas with us. I’ll never forget it because after taking the picture, I discovered his love of bubbles. They were a kitty stocking stuffer and he chased and swatted them with endless enthusiasm. I imagine he’s doing plenty of bubble chasing and more these days, pain-free and happy. 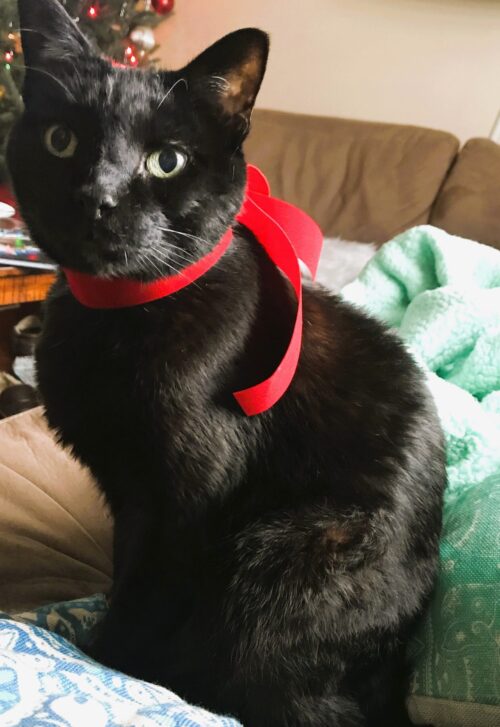 In a more positive turn of events, I started working at Basepaws later that year. Basepaws is a company that created the world’s first at-home Cat DNA Test and conducts feline health research to better understand diseases that can affect our beloved furry family members.

Every day, I learned more about feline genetics and predisposition to disease, and how the oral microbiome (bacteria, viruses, fungi, and other microbes in cats’ mouths) can be a powerful indicator of an active disease—even before visible symptoms emerge. Part of my role at Basepaws is to talk about the research we do. It informs the development of future tests, similar to our flagship Cat DNA Test that relies on a simple swab of the mouth, that could help with earlier detection of a cat’s risk for currently having and/or potentially developing a disease. These screening tests could provide more opportunities to address issues sooner with a veterinarian and implement a treatment plan that addresses a cat’s unique health needs.

Yet it wasn’t long before I was faced with another challenge. One early morning in late spring of 2022, I woke up and fed Jupiter as I always did. Shortly after, he threw up nearly all of his breakfast. Anyone who has a cat knows that occasional vomiting on its own is part of the deal and usually nothing to worry about. But as Jupiter threw up again later that morning and retched in the early afternoon (in addition to uncharacteristically running away and hiding from me), I immediately scheduled an urgent care appointment with my veterinarian.

Diagnostics from that first visit showed that Jupiter had extremely high blood sugar values, but despite my many efforts to keep him calm ahead of and during a vet visit, he has always been stressed at the vet (and stress can lead to high blood sugar values). After more testing, he was eventually diagnosed with a case of acute pancreatitis. Unfortunately, from that day through early fall, Jupiter had many more urgent care visits.

Jupiter’s vet team suspected diabetes, but he simply didn’t present as a typical diabetic cat beyond the occasional high blood sugar values when he came in for urgent care (though the acute pancreatitis was a concern). Some of the reasons included that he is incredibly active, at a healthy weight, and also younger in age. His blood sugar had also been in the normal range only a couple of months earlier, confirmed by blood work done ahead of anesthesia for a scheduled dental cleaning. They conducted more tests and even contacted internists to get additional opinions about his less than straightforward case.

Fast forward to November 2022, when Jupiter was officially diagnosed with diabetes mellitus. It’s been just over one month now of big changes, both for him and for me, including a strict twice-per-day eating schedule that coincides with his twice daily insulin injections. The hope, of course, is to get him into remission as quickly as possible. 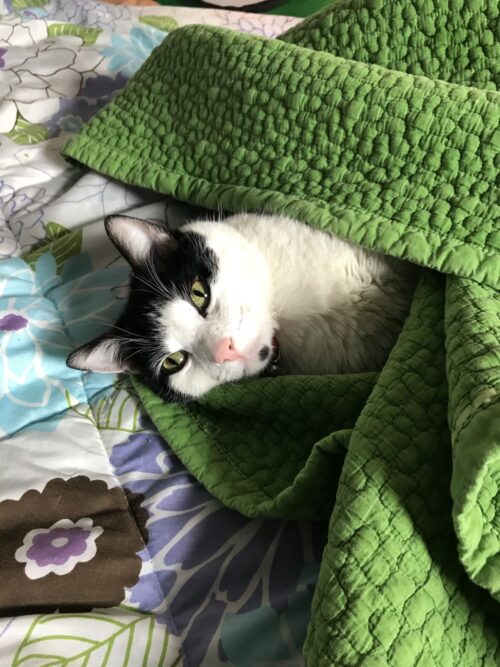 Why I’m Sharing This Story

An increasing number of cats are diagnosed with diabetes every year. The path toward Jupiter’s diabetes diagnosis was very difficult, and I wouldn’t wish it on anyone. I truly value the skill, expertise, and compassion of Jupiter’s team of veterinarians, though the uncertainty and length associated with getting a final diagnosis caused immense stress that, for me, and especially for my sweet green-eyed love Jupiter, was impossible to escape.

Jupiter’s situation created a connection to the feline health research we do at Basepaws in a way that I could never have anticipated. In my science communications role, I love to engage with cat parents like you to share information about our research, answer questions, and support recruitment for our many citizen science programs. But never did I expect to become a program participant myself, which I now am as a result of enrolling Jupiter in our feline diabetes study. It turned into something deeply personal, and a story that I wanted to share to help other pet parents who may be going through what I am or possibly may in the future.

Basepaws’ study explores the genetics thought to be involved in feline diabetes as well as other factors, such as diabetes-specific “signatures” in a cat’s mouth. It’s the first comprehensive investigation of the feline oral microbiome’s role in diabetes—a connection only recently explored in human oral microbiome studies. The study will help inform the development of a new screening test for earlier detection of diabetes in cats, hopefully even before cats like Jupiter experience visible symptoms such as vomiting, lethargy, or changes in appetite (since these are vague and can be associated with a range of other conditions).

By participating in this diabetes research program, I’m a part of something bigger than just me and my cat. I’m part of an incredible community of cat parents who are working with Basepaws to effect positive change that could help many cats in the future. Every cat DNA sample strengthens the science behind Basepaws’ research, so that one day we might have an at-home (or at the vet) diabetes screening test available to all cat parents—an early detection test that, considering the complexity of Jupiter’s case, I wish had been available to his veterinary team if it could have supported their diagnostic process.

How To Join Me and Jupiter

If you also have a cat with a diabetes diagnosis, or know someone who does, I welcome you to join me and Jupiter in the Basepaws feline diabetes study. It can be hard to find a silver lining to a disease diagnosis, but it helps me to know that our participation could help so many cats and cat parents in the future if it yields an affordable, painless, and easy to use test for earlier detection of diabetes in cats.

If you qualify for our diabetes program (or any of our citizen science programs), you’ll get a free oral swab kit to collect a DNA sample and a free Basepaws report to learn about your kitty’s breed profile, genetic traits responsible for their unique appearance, and predisposition to common feline diseases (if your cat’s DNA isn’t already on file). Basepaws pays for shipping of the test, but at this time can only accommodate cat parents based in the U.S. You’ll also want to get a digital copy of your cat’s medical records that confirm a diagnosis by your veterinarian ahead of applying to a program.

Thank you for reading Jupiter’s story. I hope that it is in some way helpful to you and/or to others, and I look forward to connecting with you again in the future. Please don’t hesitate to reach out with any questions.

*This post is sponsored by Basepaws. We only spread the word about products and services we’ve either used or would use ourselves.