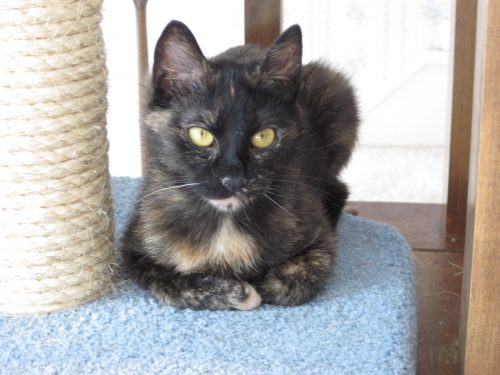 The Conscious Cat has a new family member! Allegra and I are excited to welcome Ruby into our hearts and home. Well, right now, I might be a little more excited than Allegra, but considering that Ruby only came home yesterday morning, things have been going really well. Initially, Allegra was really mad at me for bringing this little intruder into her house, and she watched suspiciously as Ruby began to explore her new home. Whenever Ruby came too close for comfort, she made sure Ruby knew that Allegra was in charge!

By late afternoon, both cats were exhausted, and ready for a companionable nap in our sunny living room. I was amazed, and thrilled, that after less than six hours, they were that comfortable being in each others’ company. And yes, it’s almost uncanny how much alike they look. In the photo below, Ruby is on the floor, Allegra on the loveseat. On some of the photos I took yesterday, I actually had to look for identifying marks to tell them apart. Even though at eight pounds, Allegra is bigger than Ruby, depending on the camera angle, it was sometimes hard to tell! 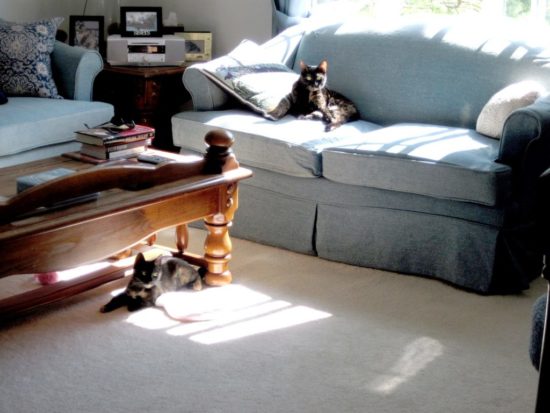 I met Ruby on March 31 (coincidentally – or maybe no so coincidentally! – the same day I met Allegra a year ago). She was fostered through the SPCA of Northern Virginia, and lived with a lovely young couple and two big male cats. Her foster parents named her Cinnamon. The SPCA’s vet estimated her to be between six months and a year old – I’m leaning toward the lower end of that range, she’s tiny! She’s a total lovebug, in fact, her name in her initial vet record is Lovebug. She was found in someone’s backyard literally “asking” to be rescued. When the kind woman heard the little kitten crying, she opened the door and Ruby ran right up to her without any hesitation.

When I met her, her foster parents had just gotten home from work, so she was all wound up and eager to play. I spent about half an hour with her, and even though she was mostly focused on playing, she still occasionally jumped up on my lap. I just knew she was “the one.” 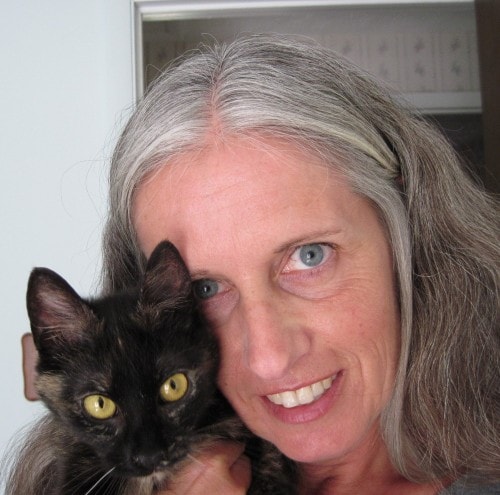 Everyone deals with loss at their own pace, and almost a year after losing Amber, I was finally ready to open my heart, and my home, to a new baby. I could have taken her home sooner, but wanted to wait until I had a few days in a row with few outside appointments so I could help Ruby settle into her new home and help her and Allegra adjust to each other.

Ruby is a very self-assured little kitten. She’s super affectionate – she likes to rub up against legs so affectionately that she tumbles over! I don’t think she knows how to play with other cats yet, the two big boys in her foster home were a little intimidating to her, but she’s able to endlessly entertain herself. Yesterday, she spent most of the day in my family room, which is really the kitty playroom. There’s no furniture, just cat trees, scratching posts, and toys everywhere. Allegra watched her every move, but didn’t participate in any play (although at times, it really seemed like she wanted to, but then she remembered that she was mad at me and the little intruder). After a while, they chased each other occasionally, and I’m hoping that as they get used to each other, they’ll learn to play with each other. In the meantime, I’m working on my hand-eye coordination so I can play with interactive toys with both of them at the same time!

She also had fun exploring stairs – her foster parents live in an apartment, so this was new territory for her. After the first few, somewhat klutzy, attempts, she now flies up and down both sets of stairs as if she had done it all her life.

Allegra is still withholding judgment as to whether all of this was really a good idea, but I’m sure you’ll hear from her in her own words in just a few days. And you never know, once Ruby settles in, you just might find her blogging here, too.

You can see wonderful “baby pictures” of Ruby (formerly Cinna), along with photos of her two foster “brothers,” on her foster parents’ photo blog.