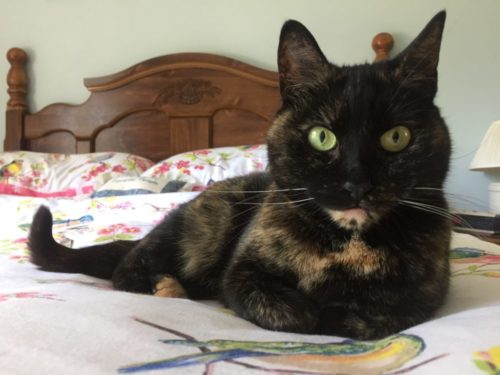 Hi everyone, it’s Ruby! Mom said I could tell you about how I sleep with her every night because she says it’s “so cute.” I don’t know why she thinks it’s cute that I have to readjust my sleeping position every time she turns over, but whatever!

So, I like to sleep cuddled up against Mom all night long. As soon as Mom goes to bed, I follow her, jump up on the bed, and curl up in her arm, right underneath her chin, under the covers. I usually fall asleep before  Mom does. And you’d think that’d be the end of it until morning, right? But noooo! Apparently, humans have to turn over several times throughout the night, or, even worse, get up to use the litter box in the middle of the night!

Of course, every time Mom turns, I wake up. And I don’t like it at all when she turns her back to me! So I have to wake up enough to get up and walk across the pillow to the other side. And wouldn’t you know, by the time I get there, Mom has the covers all tucked around her, and there’s no room for me. What is up with that! Well, I know how to fix that. I bop her on the nose a couple of times until she wakes up! Sometimes I have to bop her pretty hard, but eventually, she’ll lift the covers so I can crawl under and curl up in her arms again.

When she actually gets up to use the litter box, I sometimes follow her and watch her. Oh, be quiet, Allegra. I know it’s not polite to watch someone do their business, but you do it to me all the time! Anyway, when Mom has finished, she usually scoops me up and we go back to bed together.

And if you’re wondering where Allegra is during all of this: she sleeps at the foot of the bed. She makes a little nest for herself from the duvet cover, and she pretty much stays put all night long. I wish Mom slept as soundly as Allegra does – it would be so much nicer if she never moved or got up during the night.

Kitties, how do you sleep with your humans?