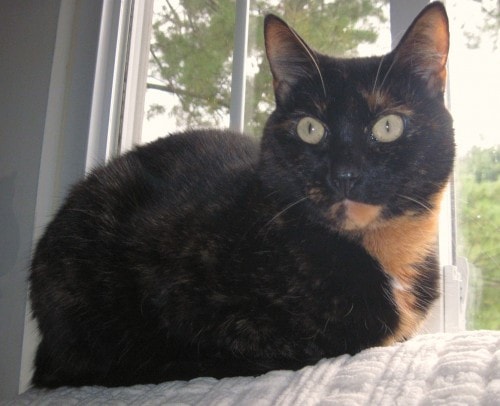 Hi everyone, it’s Allegra! If you’ve read Mom’s four-part series titled “Allegra Goes to the Dentist” last week, you already know what happened to me. In case you missed it, here are the four posts:

Allegra Goes to the Dentist – Part One: Diagnosis and Choosing a Veterinary Dentist

Allegra Goes to the Dentist – Part Three: Our Day at Animal Dentistry and Oral Surgery

Mom did a pretty good job describing everything that happened, but I figured you’d want to hear about the experience from the only one who really matters in all of this: me!

What, Ruby? You matter, too? Butt out, little one, this is my story to tell.

You’ll have to forgive me if this is a bit long winded, but it was quite an experience, and I need to tell you about all of it!

I kind of knew something was up after my friend Dr. Tasi came over late August. I love her, she has a wonderful, gentle energy, and even though she does what mom calls an exam to me, I mostly let her get away with it. I’ve trained her and Mom well over the last few years: they’ve learned to do what they call “prioritizing,” which is just a big word for “let’s make sure we check out the most important things first, before Allegra gets upset with us.” I’ve got the power, people! That day, when Dr. Tasi checked my mouth, she found something that had her concerned. I could have told her it was a problem without her looking at it, but humans can be slow to figure things out.

Anyway, long story short, she said I needed to go to a veterinary dentist. I wasn’t sure what that meant, but I could tell that it upset Mom. She and Dr. Tasi talked for a long time, and then they went out to lunch. Huh.

After that, I could tell that Mom was feeling a little anxious. She’s usually really calm and grounded, but for the next month, I just knew something wasn’t quite right. I never thought it was about me, though!

Then this happened: Mom actually forgot to feed me one morning! I mean, seriously? How is this even possible? I kept trying to remind her, but she just said “I’m sorry, Allegra, I can’t feed you this morning.” I was so relieved when she finally took the jar of nutritional yeast out of the fridge. It wasn’t breakfast, but I’d take it. But instead of putting some on the floor in the kitchen for me, the way she usually does, she put it way in the back of a carrier that, strangely, had appeared in our bedroom a few days earlier. I was desperate, so I waked right in. And before I knew it, Mom had zipped up the door and I was trapped.

I wasn’t sure what was happening. One minute I was begging for food, the next minute, Mom picks up the carrier with me in it and heads out the door! When she put me in the car, I had a vague memory of having been in a car before, when Mom brought me home – but that sure felt like a happier occasion than this! I let out a wail, and then another one for good measure. I was not pleased with this turn of event!

Mom spoke to me in a quiet voice, but I could tell she was upset, too. I kept crying, but eventually, that got exhausting, so I just kept my nose up against the front of the carrier. That was as close as I could get to Mom, and it was reassuring to feel her hand against the wire mesh occasionally.

Just when I was getting used to this new state of affairs, the car stopped moving. Mom said we had arrived, whatever that meant. She took the carrier with me in it out of the car, and we went into a building that was way bigger than our house. A nice lady showed us into a room with a table in the center, and Mom sat my carrier on it. I was really scared. Mom tried to reassure me that everything would be okay, but I wasn’t buying it.

After a few minutes, a man came into the room. Even through my fear, I could tell right away that he had good kitty energy. I still felt it was safer to stay in the carrier, but he and Mom gently tipped the carrier and I had no choice but to crawl out. Then the man put his hands on me! I was too scared to put up a fight, but he was so gentle, it actually felt kind of nice.

Then a woman came into the room and said she would “take me to the back.” I didn’t know what that meant, but I ran back into my carrier, because that felt like the safest place right then. Once we got to the mysterious back, the woman opened the carrier and spoke to me in a soft voice. I even let her pet me. Then she and another woman took my blood! It happened so fast and they were so good at it, I barely even flinched. They even trimmed my nails, and I was so surprised, I didn’t fuss about that, either. I just hope Mom doesn’t get any ideas that this means she can now trim my nails easily!

After all of that, they brought me back to Mom. I thought maybe we could go home now, but no! After waiting for a while, the nice woman came to get me again, and stuck me with a tiny little needle. After that, things are fuzzy. I started to feel really sleepy, and a bit woozy. I vaguely remember being carried away from Mom.

The next thing I remember is that I woke up and my mouth felt funny. The nice woman was right there with me, and she told me Mom was in the waiting room, and that I would be able to go home with her very soon. I was pretty out of it, so I’m not even sure what any of that meant.

After a while, the nice woman put me in my carrier, and took me to Mom. Mom was so happy to see me, and I wanted to show her that I was happy, too, but I was just too groggy and couldn’t do anything except stare at her. Sometimes, it looked like there were two of her. Weird. Finally, Mom took me to the car, and we were on our way. This time, I didn’t make a peep.

I was so happy when we got home. Well, I was, until Ruby saw me. She growled and hissed at me! You’d think she would have been happy to see me after I was gone all those hours!

Ruby: You didn’t even smell like yourself, Allegra! I thought you were an intruder!

Yeah, whatever. Ruby kept annoying me all afternoon long, and I really wanted to teach her a lesson, but it was just easier to avoid her. Thankfully, by the time we all went to bed, Ruby had chilled, and we slept with Mom the way we always do.

Mom says we’re going to need to keep a close eye on my teeth from now on. I don’t know whether that means she’s going to stare at my mouth all the time or what. What I do know is that my mouth feels so good! The pain I’d felt for a few months is completely gone!

Ruby: Are we friends again, Allegra?

Of course we are, Ruby. You may be a little brat, but you’re my sister, and I do love you. Most of the time, anyway.

11 Comments on Allegra Goes to the Dentist: In Her Own Words