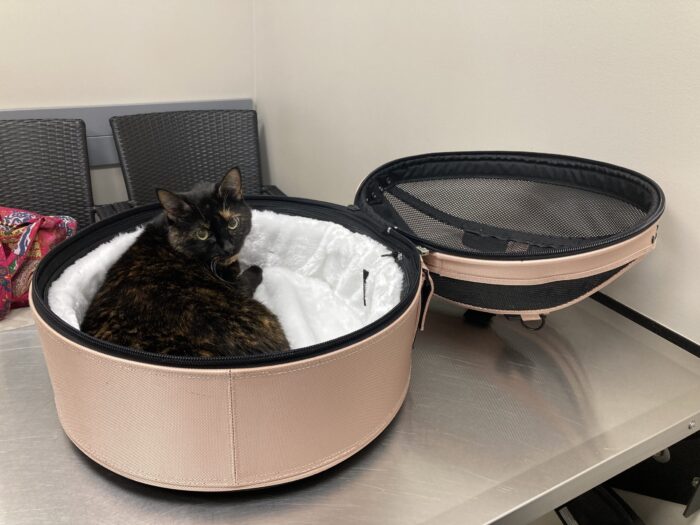 If you’ve followed us for a while, you may remember Allegra’s last visit to the dentist in 2015. Six years later, it was time again: last week, I took Allegra to Animal Dentistry and Oral Surgery in Leesburg, VA.

The 2015 visit was Allegra’s first dental procedure. She was six years old at the time. At that time, radiographs revealed resorptive disease, and Allegra had several teeth extracted. I fully expected at the time that she would need annual dentals. Thankfully that turned out not to be the case.

I had been brushing Allegra’s teeth since 2011. In 2018, I started using 1TDC. At Allegra’s check up a year later, her gums looked better than the previous year and there was less evidence of gingivitis. I continued with 1TDC and I also use MAXIGuard Oral Cleansing Gel, designed to reduce the accumulation of plaque and tartar.

During last year’s check up, it became evident that Allegra’s teeth would need attention sooner rather than later. I balked at it. We were in the middle of Covid. Vet clinics were doing curbside service. The dental clinic had changed hands since we had last been there, and even though the new owner’s reputation was stellar and our vet, Dr. Tasi, trusted her with her own cats, the thought of handing Allegra off in the parking lot to someone I’d never met just didn’t sit right with me. However, Allegra’s most recent check up in August revealed increased redness on her gums and considerable amounts of tartar on her back teeth. It was time to make the appointment.

Preparing for the appointment

Thankfully, the clinic is letting clients into the exam room again, they just don’t allow them in the waiting room during the procedure as they had done in the past. That was fine with me. I’d happily wait in the car outside as long as I could meet with the vet and be present while she examined Allegra.

Enter two miracles that made the entire experience so much less stressful than it was six years ago: Gabapentin, and the Sleepypod Mobile Pet Bed.

“Gabapentin is a great medication to use in most cats prior to anesthesia,” says Dr. Mary Buelow, DVM, DAVDC, a board certified veterinary dentist and owner of Animal Dentistry and Oral Surgery. “First, it decreases the anxiety and stress of the car ride and visit to the vet office. Second, it has been shown in studies to decrease anesthesia drug needs, meaning that we can decrease the amount of anesthesia needed to keep them asleep. It’s a win-win for both our feline patients’ mental health and their anesthetic needs!”

The Sleepypod Mobile Pet Bed is one of the safest carriers on the market. I don’t know of any other carrier that makes vet visits as stress free as this one.

A few days before our appointment, I brought the Sleepypod into the living room. Allegra immediately claimed her “new” bed. The carrier is always out in another room, but she’s not shown much interest in it there. She took naps in it for several days in its “new” spot.

I gave her Gabapentin about two hours before we had to leave. She was fast asleep in another bed after that, and all I had to do was lift her into the Sleepypod and zip up the dome. The 25-minute drive was quiet, and she even slept for part of the way. Contrast that with six years ago, when she cried and cried the whole way.

The exam before the procedure

When we arrived, Customer Service Representative Natalie greeted us with a cheerful smile that you knew was there even though it was hidden under her mask, and escorted us into the exam room. A few minutes later, Dr. Buelow joined us. She  had already received a written referral report from Dr. Tasi, but took the time to thoroughly review Allegra’s health history with me. She discussed her treatment plan, but cautioned me that she wouldn’t know for sure how much would need to be done until they had taken x-rays. She left to prepare a treatment estimate.

A few minutes later, Head LVT and Hospital Manager Jenn Bozic came into the exam room. She remembered Allegra from six years ago! She fussed over Allegra, then shared Dr. Buelow’s estimate with me. Now came the hard part: I had to leave my little girl for a few hours – but I knew she was in the best hands with Dr. Buelow and her staff.

Waiting in the parking lot

Since they schedule multiple patients for the same day, they can’t tell clients exactly when their pet’s procedure will be started until all patients have checked in, but they are absolutely amazing at communicating with clients throughout the day. Dr. Buelow called when they were getting ready to take x-rays. She called again 30 minutes later. Sadly, the news wasn’t good: Allegra had developed resorptive lesions on almost all her teeth, except for her canine teeth and the small incisors in between. She would need all but those front teeth extracted.

The next hour was the hardest part. I knew my little girl was under anesthesia, and I nervously waited for the call that she was in recovery. It came just over an hour later. Dr. Buelow assured me that she had come through the procedure beautifully, was recovering well, and should be ready to go home in another hour.

The call I had been looking forward to all day came soon: Allegra was ready to be discharged. Natalie escorted me into an exam room. A few minutes later, Jenn brought my very groggy girl back to me. She explained discharge instructions and handed me three day’s worth of pain medication. We were on our way home!

Allegra was super wobbly when I let her out of the carrier. I initially tried to confine her to my bathroom, but she frantically pawed at the door even though I was in the room with her. I didn’t have a way to effectively block off our stairs, so I didn’t let her out of my sight. I had intended to put the Sleepypod away again, but she decided that that would be her recovery spot  – yet another testament to just how great this carrier is. Wouldn’t you think that at this point, the association with the carrier would be a negative one? Not so – she practically lived in that carrier for the next 36 hours.

She was pretty restless for the next few hours. She’d crouch in the carrier, then wobble around the house again, then go back to the carrier. Eventually, she stayed in the carrier, but she was clearly uncomfortable. I offered her some canned food an hour after we got home, but she showed no interest. I finally managed to get her a small amount later in the evening by hand feeding it to her.

I gave her her first dose of pain medication just before I went to bed. I had hoped she would come to bed with me like she usually does, but she was clearly uncomfortable and I didn’t want to lift her out of her carrier. I briefly debated sleeping on the floor next to her, but my body isn’t as forgiving as it used to be, and the last thing I needed after all the stress we had been through was a bad back. Of course, I got up multiple times throughout the night to check on her. By about 2am, she had finally relaxed enough to be curled up in her favorite sleeping position.

She wasn’t interested in her breakfast, and she was clearly uncomfortable. I gave her her second dose of pain medication, and Dr. Tasi suggested giving her a dose of Arnica to help with the swelling and bruising of her mouth. By mid-day, she finally seemed a bit brighter. She ate a full meal of canned food, and abandoned the Sleepypod for her favorite sun puddle. That night, she came back to bed with me and slept next to me the way she always does.

By the morning of the second day, it was like nothing had ever happened. She was back to being her happy, sweet self. I continued to give her pain medication as directed for three days. There is no need to worry about her stitches, they will dissolve on their own. Dr. Tasi will recheck her mouth in two weeks to make sure everything has healed properly.

Managing my own anxiety

I felt extremely anxious in the days leading up to the procedure. I know full well that Allegra was picking up on my stress, and I did my best to keep my anxiety under control, but ultimately, I’m sure she felt some of it. You’d think that because I know a lot about feline health and because I’ve worked in vet  clinics myself, I wouldn’t be so worried, but when it comes to my own cats, all bets are off, and, as Dr. Buelow said, “sometimes knowing too much is not a good thing!”

Watching her have such a hard time for the first 24 hours after the procedure was really difficult. Even though I knew that nothing I  was seeing was unusual, considering what she had been through, and that it would pass, and even though I knew that the strong pain medications she was on were doing the job, I just felt awful seeing her like that. I almost felt guilty for putting her through this! I also wished I hadn’t waited to make this appointment for her as long as I did, because she must  have been in some amount of pain for quite some time, even though she never showed any signs, but then, cats just don’t. I do know that once she’s completely healed, her mouth will feel so much better, and with any luck, she’ll never need another dental procedure, since canines and incisors are unlikely to develop lesions.

Why you should consider a veterinary dental specialist

Hearing the words “your cat needs a dental” always instills fear in cat parents. It’s why I put off Allegra’s procedure longer than I should have. But knowing that the vet who will take care of your cat is an expert at anesthesia and dental care takes a lot of the worry out of the process. While most vets perform dentistry, not all perform it to the standard I would want for my cats. If you have access to a dental specialist in your area, I highly encourage you to visit them. If you don’t, make sure to ask your vet these 13 questions before scheduling a procedure.

I can’t say enough good things about Dr. Buelow and her team. From the time I made the appointment to the time I left, I felt comfortable that Allegra was getting the best possible care. They truly care about each and every one of their patients. They understand how anxious pet parents get when it comes to anesthesia. Their compassion and client communication is unlike anything I’ve ever experienced in the years I worked in the veterinary profession or in my interactions with veterinary clinics since then.

17 Comments on Allegra’s Visit to the Dentist