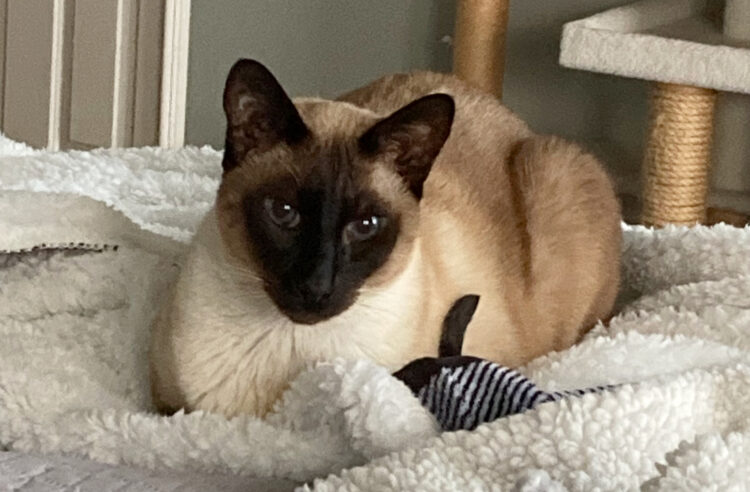 2022 was the year my human life intertwined with multiple cats’ lives. Somehow, in one year, I encountered a myriad of cat health, cat ecology and cat behavioral issues. Each unique situation provided me with ample material to weave the newest feline science and medicine into my personal accounts of what interacting and sharing life with cats means today.

The year had just begun when the initial diagnosis of feline asthma blindsided my family. Our robust and active 9-year-old Uli had visibly slowed, displayed symptoms of kitty congestion and the occasional bout of “dry hairball” coughing. Earlier in December of 2021, we had just run a full panel of typical feline respiratory viruses; all negative. By January, his condition warranted thoracic radiographic analysis of the bronchi and lungs. Not surprisingly, our vet concurred with the radiology specialist that Uli showed classic asthma pathology related to restricted airways and defined bronchial, interstitial cell and alveolar disruption. 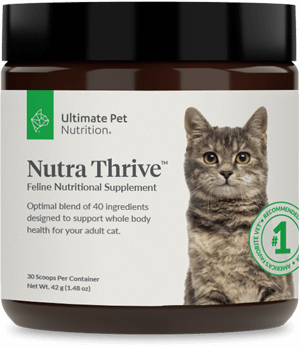 What is feline asthma?

Asthma in cats is still a relatively rare diagnosis. Current estimates range from 1% to 5% of owned cats. Although not fully substantiated, allergens can trigger asthma-like symptoms in lab settings, leading to the hypothesis that, at least in some cases, triggers may be found and eliminated in the environment, as is done for many human cases.

Asthma is typically divided into two categories; eosinophilic (allergic) or neutrophilic (bronchial). Cats and humans share many of the same airway damage in either category of symptomatic asthma. These tissue and organs changes are well characterized in human disease. In cats, however, not so much.

The parallel between human and feline airway remodeling in asthma was recently described by a group in Bologna, Italy (10.1016/j.tcam.2021.100587.) Human and cat airways are lined with muscle cells that allow for flexibility of the long bronchial tubes. When these muscle cells enlarge and lose their inherent flexibility or are restricted from contracting or relaxing by surrounding fibrotic cells, the airways thicken and make breathing more difficult. D’Annunzio, et al., compared the human histological and molecular changes to feline histological and molecular changes and found consistent parallel developments. 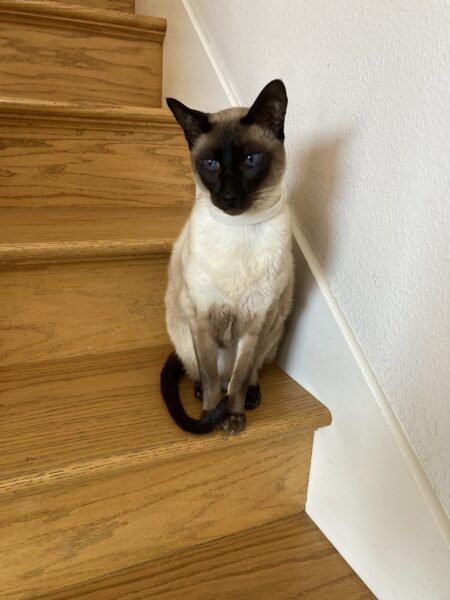 Care and treatment of cats with asthma

Standard of Care (SOC) for feline asthma is a full course of glucocorticoids (GCs). GCs, usually in the form of prednisolone, supposedly reduce airway inflammation and prevent fibrosis. A large initial dose is followed by a descending series of lower and lower doses. Typical regimes are given orally over several days or weeks. Liquid forms of prednisolone are readily available if your cat likes to lick his medicine. You can even order chicken flavored medications.

Oral GCs are not without side effects. Cats need to be monitored for glucose-related symptoms, chiefly increased water intake, indicating possible development of diabetes mellitus. Heart failure and weight gain are other prominent side effects of long-term oral steroid use. There is little doubt of the efficacy of oral GCs in the treatment of human and feline asthma symptoms. However, full resolution of the underlying inflammation is unclear.

Symptom resolution is one thing. Stopping the downward cycle of inflammation-induced tissue damage is the true goal for treating asthmatic cats. 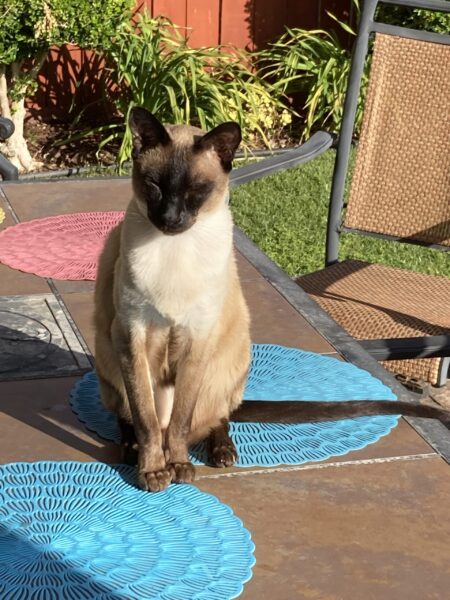 Standard of Care versus Practical Care: Uli and the Prednisolone pill

Some cats don’t actually care about SOC. Uli is one of them.

Day 1: the kind vet tech administered the initial pill, leaving us to fend for ourselves later. That evening, two of us cornered him and managed to get the pill down only after knocking dishes off the table and tearing through an old blanket.

Day 2: the stealth approach – grinding pills and mixing with fresh chicken. Okay once, but a firm, “who do you think you are messing with” by the afternoon.

Day 3, stealth part two: this time mixing with shrimp and shrimp water. A partial success in the morning. A full blown “humans are so dumb” in the evening.

Pill pockets?  A disaster. The liquid form resulted in a trip to the drugstore for triple antibiotic and large bandages. Our last resort was a return trip to our veterinarian and a long-acting injectable version of prednisolone.

We need forms of feline medicine for the real world.

Treatment in either case reduced mucus production and provided symptom relief. Eosinophilia was reduced and lung function improved.  Neither treatment was able to reverse the airway damage in this group. “What we have learned about feline asthma is that it is a huge spectrum of diseases. What works for one cat might not work for another,” says Elizabeth Rozanski, DVM, DACVIM, DACVECC, one of the study authors. Their study was small as recruitment was an issue. Therefore, they were unable to tease out potential remodeling differences.

Inflammation is only part of the complex asthma disease. Once the airways become thickened, the chances for bronchoconstriction and breathing difficulties increases. Short and long-acting bronchodilators are the line of defense in humans. Formulated to be inhaled, drugs such as salbutamol are typically put into pressurized metered-dose inhalers (pMDI).

Dr. Rozanski’s study used a commercially available feline-designed pMDI. What they noted in their study was good client compliance with inhaled fluticasone, not a given since cats can be resistant to manipulations. In a soon to be submitted publication, they performed a follow up study to assess the “time to tolerance” for pMDI in both cats and dogs. As expected, dogs were easier to condition and learned tolerance in about 5 days. 20 out of 22 cats allowed pMDI use in about a week but 2 were having nothing to do with it.

If you can actually train your cat, another study from 2021 (PMC8388725) compared two pMDI mask configurations on one cat to an endotracheal tube configuration on another cat. Using a non-invasive computational approach, they concluded that either setup deposited a therapeutic dose of salbutamol particles into the lung.

Teaching or training your cat may require patience and watching lots of YouTube videos. Luckily, we haven’t had to go that far with Uli yet.

New therapies on the horizon?

Consistent airway changes, in humans and cats, are all manifestations of chronic inflammation. Molecular drivers of lung inflammation is an ever changing research landscape, but a signaling protein; TGFb, appears to be a central player in the downward cycle of untreated airway inflammation. Asthmatic mice treated with an anti – TGFb neutralizing antibody showed reduced levels of airway inflammation in a 2018 study (10.3892/etm.2017.5501). Sadly, even in human medicine, inhibitors of TGFb and downstream signaling pathways have proven elusive in terms of efficacy.

Drugs like montelukast (Singulair) that can help block some human inflammatory pathways are not widely used for feline asthma and carry risks of increased aggression and depression. Studies from 2008 suggest that cats might not even produce the protein blocked by montelukast-family of drugs, rendering them useless.

All this leaves cats like my Uli in limbo. He settled in briefly after the initial long-acting injection. However, as I will outline in the following posts in this series, our lives have been upended by this disease, adding stress and anxiety to Uli’s life and to ours. In the fall of 2022, we had a follow-up consultation and a second injection. For now, he is stable, but he is clearly leading a less active life than in previous years. 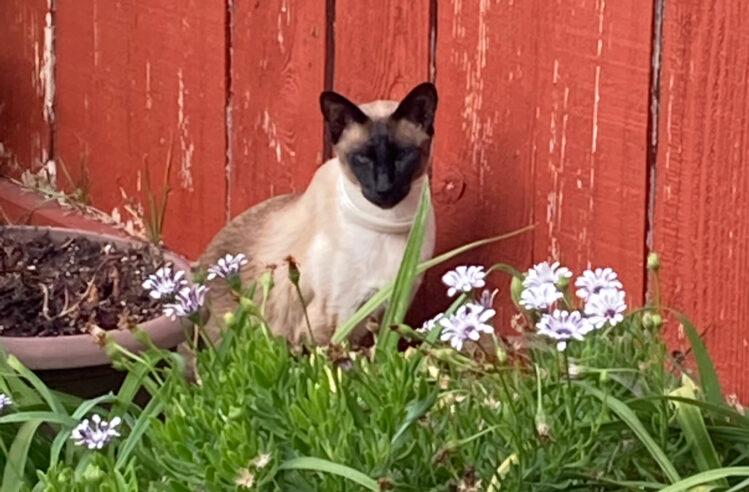 Getting critical research dollars to veterinary clinicians and scientists is a priority for my writing. Feline medicine is woefully underfunded. Given the increasing awareness that cats and humans seem to have parallel disease paths, we should be investing our research funding towards understanding how treating cats can boost our understanding of complex human diseases. Chronic conditions like asthma are a good starting point.

Ingrid R. Niesman MS PhD is the Director of the SDSU Electron Microscope Imaging Facility at San Diego State University. She graduated from Utah State University and received her MS from the University of Illinois-Urbana-Champaign. After 30 years of technical electron microscopy, cell biology, neuroscience and infectious disease research, Dr. Niesman completed her PhD in the UK at the University of Sunderland. Her work experience includes time at LSU Medical School, Washington University, UAMS in Little Rock, UCSD, TSRI and a postdoctoral year at CALIBR in La Jolla, CA. She has worked for at least two National Academy of Science members and is credited with over 50 publications. She can be reached at [email protected]

3 Comments on My Cat-astropic Year, Part One: The Challenges of Treating Feline Asthma